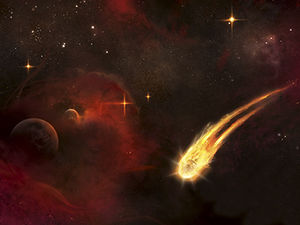 Mallus travels through the Nothing after the End Times.

Mallus, also known as the Broken World, is the fiery, metallic core of the World-That-Was. After the destruction of that world, it was hurled through the Aetheric Void until it was found by Dracothion and set into the firmanent of the Realm of Azyr, becoming one of the realm's many moons.[1a][1b][2a]

After the World-That-Was was destroyed during the End Times, its metallic core was hurled into the cosmos, Sigmar clinging to it, it was eventually caught by Dracothion and set in the firmament.[1a]

The Chaos Gods let Mallus, and remnants of the world, survive and it became a lodestone for the echoing souls of those who sought to deny Chaos of its ultimate victory. The gods of the fallen world slumbered while being nourished by the magics that saturated Mallus, slowly gaining a form that could interact with the material world, thanks to the sphere's eldritch aura. A billion souls were one moment corporeal the other incorporeal as the suns and moons of heavens glowed. Eventually, awakened by Sigmar's will, they populated the Mortal Realms.[1a]

The core is made of Sigmarite a powerful magical metal used in the making of the weapons and armours of the Stormcast Eternals.[1b]

Sigmar's mood is tied to Mallus, when it's lively so is he and when it wanes so does he.[1a]