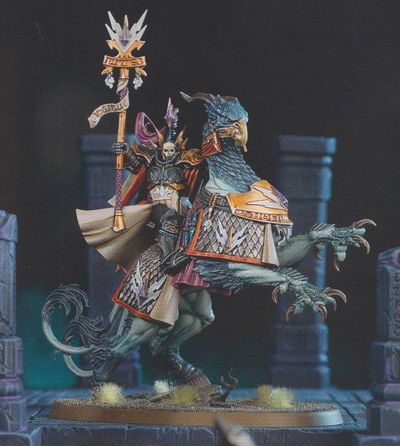 As a mortal his name was Lynghal Oroni and served as a mage-priest of the city of Metharr in the Realm of Shyish where one of his tasks was to make an annual pilgrimage to collect water from Lake Lethis. It was a dangerous journey and he would frequently have to fend off attacks by the both the living and the dead, but his success meant he rose to the position of First Warden of the Graves, guarding the burial garden of the city's nobility.[1a].

In this role, he would patrol and apprehend any grave robbers, who he would send to the Corpse-Lords who ruled the city, who in turn would condemn them to a period of reflection - although none ever returned. Only when his sister, Alestreya was arrested and sentenced to a prayerful penance, did he become concerned, especially when the lords would not listen to his own entreaties for his sibling.[1a].

Investigating he discovered the water of Lake Lethis was being used to wipe the minds of anyone that was considered to have wronged or was a threat to the Corpse-Lords. Lynus unleashed his formidable powers in his anger, first releasing all the captives and then passing final judgement on the lords themselves. Although the grateful city offered him in turn the lordship, he declined and taking up the arms and armour of a Metharri hoplite he quested through the realm fighting against evil until he was slain on a forgotten battlefield.[1a].

Sigmar had taken note of his crusade and drew forth his soul to be reforged as a Lord-Arcanum, taking the name of Lynus Ghalmorian in his new life. He was assigned the Sempiternals and the role of defending the Midnight Tomb beneath the city of Lethis although he resented the reminder of his past life and the use to what the waters had been put to. However, he trusted the judgement of the God-King and was a powerful example and defender of the city. [1a].

As the Necroquake causes havoc, Sigmar unleashes the various Sacrosanct Chambers against the new hordes of the dead. Lynus assists with the defence of the city of Glymmsforge, joing other Chambers of the Anvils and the Hammers of Sigmar as well as many mortals in its defence. [1a].

Following the Necroquake, Nagash discovered the Midnight Tomb and its contents and was so enraged he unleashed a vast army under the Mortarch of Grief on the city. Despite heroic efforts and even attempting engage her in combat after blasting a path through her nighthaunts, he was overcome before he could reach her and his soul dispatched to the Realm of Azyr. [1a].

Once again he was reforged, but filled with even more guilt he is now more moribund than ever - making a new pledge to work tirelessly until the released prisoner of the Midnight Tomb is confined once more. Once this was achieved he would seek his final end in the wastes of Shyish. Under attack from the Nighthaunts of Lady Olynder, King Ecravir of the Idoneth Deepkin calls for help, an unprecedented act and Lynus leads part of his Chamber to their aid. [1a].