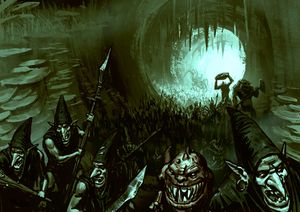 Lurklairs are the settlements and strongholds of the Moonclan Grots. These are most often built within caverns and tunnels hidden in some of the most unstable and inhospitable regions of the Mortal Realms.[1a]

The Lurklairs of the Moonclan Grots are often found in regions dismissed by other races of the Mortal Realms as useless wastelands. These regions are often riddled with parasites and far from fertile enough to support crops. Nor are such regions able to support the great edifices of structures like Stormkeeps and Dreadholds. To the Grots these lands are much prized, as they can propagate and expand without worry of others seeking to claim their territories.[1a]

These Lurklairs are often a series of interconnected, fungal-ridden tunnels lit by glo-squigs and bioluminescent fungus. They are dank, dark places where water drips from the ceilings and slime covers the cavern walls. The largest of the caverns are filled with hollowed out fungi used as dwellings, corrals and paddocks for Squigs, and huts made from junk where the most important grots live. Smaller caverns are known as Slinkholes and are used as guard posts.[1a]

Additional caverns adjoined to the central ones often serve as prison quarters for slaves, nurseries for all manner of fungus, and storehouses for loot.[1a]

The largest Lurklairs can stretch on for miles and some even rival Hammerhal in size, serving as the home of untold millions of Moonclan Grots and their allies. These will often make use of the ruins of Karaks, Magmaholds, and Skaven Burrows.[1a]