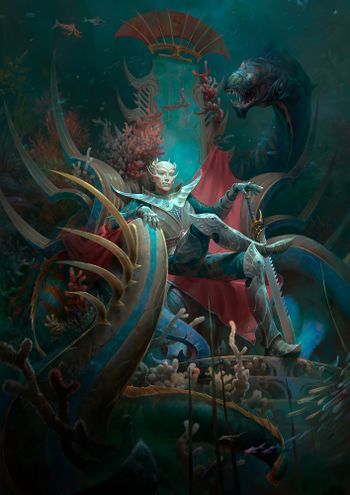 Lurien Soultaker on the Jade Throne.

He favours a periwig, its lengths tied into braids and knots with turquoise and gold, showing the colours of the royal family. [1a]

He was adopted by Lágethé, the great tidemistress of Briomdar and raised by her as her son and hier. [1c] When still a child, Lágethé gave him a magical necklace that blended air and water. [1d]

As an indolent young prince he thought himself the finest blade and dancer in the Jade Court. He had assumed on his adopted mothers death that he would be proclaimed king by the Akhelian Council as in the thousand years existance of the enclave, few heirs had ever been rejected. However, he was challanged in his claim by the Raidlord of Briomdar, Vanglyr Fellglaive, who swiftly defeated him and proved his vaunted skill with a sword somewhat overblown. [1a]

He awoke in prison but was released by the ambitious namarti Namariel who sought to become his wife, he promised but she bound his blood oath by the old gods before she released him. [1b] The two escaped into the city and he met her companions, the giant Urael and childlike Morogai, they hoped to follow Queen Anaer back to her home and comvince her to aid Lurien, a plan he was dubious about. However, his former companion Ēodrain who had joined her retinue recognised Lurien and tried to capture him, but was wounded and taken as captive by the fleeing pair as they headed for the dangers of the open ocean. [1b]

As a Prince, he had lost track of the various promises he had distributed in the slave coridors and noble houses of the enclave and considered himself good at giving promises. This had given him a certain reputation that Namariel was well aware of. [1b]