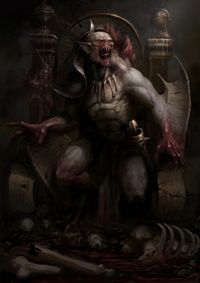 Abhorrants spread the madness of their court via their dark wizadry.

The Lore of Madness are the spells used by the Wizards of the Flesh-eater Courts.[1a] The abhorrant arch-regents and kings of the Flesh-eater Courts are the users of this foul lore of deathly magic. Abhorrants, like many vampiric creatures, are powerful wizards. Steeped in the magic of death and darkness, the Abhorrant Ghoul Kings can use their fell magics to knit together their wounds, mend the broken bodies of their mounts, hurl sorcerous bolts or even summon their troops with a simple gesture. In the minds of these deranged beings, they believe themselves conduits of holy power or benevolent practitioners of magic. A Ghoul King king may speak an enscrolled command for its enemies to kneel before it, and in its eyes they immediately and humbly acquiesce this command - but in truth the abhorrent summoned tendrils of necrotic energy that ripped the limbs from its foes, leaving them only mutilated torsos to writhe pathetically in the mud.[1b]

An abhorrant can also amplify the madness of its followers, causing their insanity to manifest physically. Mordants can be made to believe they are wearing suits of impenetrable armour, and the sheer strength of their delusions will magically manifest in such a way that that causes swords and spears to bounce harmlessly off their flesh. Others may see themselves wielding enscrolled weapons that strike and parry with arcane alacrity, when in reality the abhorrent simply sent the mordants into a fury for which they thrash at their enemies with unnatural speed and savagery. It is by the power of this dark wizardry that an abhorrant is able to transform a wretched cannibal into a mordant and expand their courts.[1b]

The Wizards able to cast these spells are: