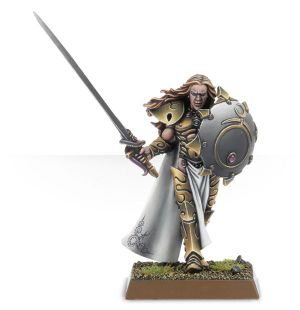 A miniature of a Lord of Slaanesh wielding a Quiksilver Sword and a Chaos Runeshield.

Those on foot are accomplished swordsmen always eager to test their skills on great foes as a way to strive for perfection. They can lead their fellow warriors to attack a unit with excessive force.[1a]

They can ride to battle mounted on a Daemonic Mount, who strikes with their poisoned tongue. These lords are exceptionally beguiling and if one gazes too long at their splendour, terrible notions begin to form. They can also grant their followers a boon of hellish swiftness through soporific musks and perception-altering auras.[1b]