From Age of Sigmar - Lexicanum
(Redirected from Lord of Plagues)
Jump to: navigation, search 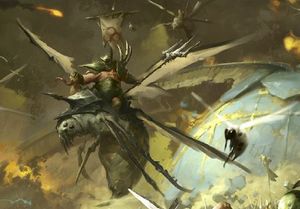 A Lord of Afflictions. 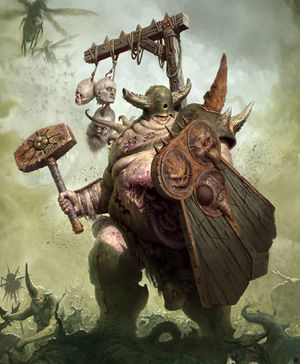 A Lord of Blights.

In battle, the Lord remains vigilant for hardy enemies so their bodies can be added to his orchards after the battle. They plant corpse orchards from the meat-mulch from battles and various plagues. From these orchards arise twisted gallows trees that blight the land and bear aloft the bodies of the Lord's chosen victims. The head of each cadaver is carefully filled with pus drawn from a Great Unclean One and sealed with a mixture of blood and wax. When they are ready the withered bodies drop from the trees. Then the Lord of Blights collects his harvest and distributes them to his followers so that they will fling them at the enemy to explode in a blast of noxious effluvia.[3][4]

The finest specimens of their Thrice-rippened Death's Heads harvest are kept by the Lord which he carries into battle hung from his Gallowrack, which they hurl at their foes as diseased projectiles. The Lord of Blights is swollen with muscle and carry an enormous, dented Bubotic Hammer which is used to shatter bone and rupture organs while his Vermin Shield, spiked and disease-ridden, can be used to both block incoming attacks as well as to smash enemies from their feet. Both of these are covered in Nurgle icons.[1b][3][4] 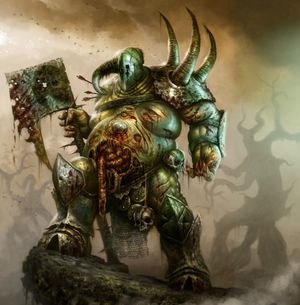