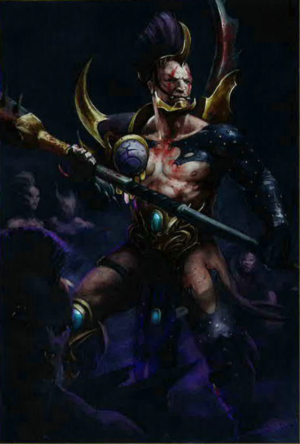 A Lord of Pain.

Lords of Pain strut at the forefront of the Hedonite armies, they are known as Paragons of Slaanesh's dark faith.[1a]

Each lord has dedicated themselves body and soul to the pursuit of excess. Yet despite the fact disciples of Slaanesh are encouraged to indulge in a wide spectrum of depravities, most followers generally fall under one of the vices that makes up Slaanesh's Domain. In the case of the Lord Pain, their vice is focused upon enduring and inflicting agony on a large scale.[1a]

Lords of Pain often originate from the dark martial orders dedicated to Slaanesh, they have trained themselves to the peak of mortal capability until they are able to slay their adversaries with a few tormenting blows. Lords of Pain are committed sadists, utterly dedicated to inflicting crippling pain which becomes their whole existence.[1a]

In time, those champions of Slaanesh destined to become Lords of Pain soon find themselves devoid of any sense of contentment outside of spreading their supposed gifts. The end result soon becomes apparent, inflicting torment is no longer an artform but becomes an end in unto itself. Like most followers of the Dark Prince, they enter a dark spiral one can no longer rise from.[1a]