From Age of Sigmar - Lexicanum
(Redirected from Lord Regent)
Jump to: navigation, search 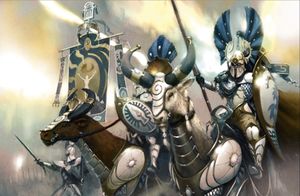 The Lord Regent, or Lady Regent, is the highest position a member of the Vanari caste of Lumineth Realm-lords can attain. They are the consummate generals and leaders of the hosts, vetoing and starting invasions at a moment's notice. Lord Regents - as the name suggests - are regents of Tyrion's will, being well-versed in the Decree Tyrionic and speaking with his voice and authority in the debates and councils of the Teclian nations. In truth, however, they would wish not to be embroiled in such debates, as the only places in which the Lord Regent feels truly at home are the training fields, strategist's halls and the white-hot crucible of battle. [1a][2a]

To be named Lord-Regent involves taking several tests of worthiness devised by Tyrion himself - these include travelling to the edge of Haixiah and returning enlightened, and taming their Lightcourser mounts. [1a]