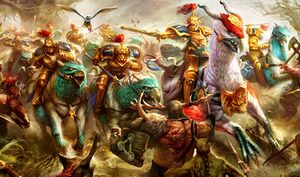 A Lord-Aquilor leading his Chamber against Maggotkin of Nurgle.

Lord-Aquilors lead the Vanguard Auxiliary Chambers of the Stormhosts and are entrusted with a high station and matchless autonomy. They have waged a shadow war in the God-King’s name since the first days of the Age of Sigmar and now they are openly bringing the fight to his enemies, fighting alongside the Strike Chambers as expert hunters and the masters of ambush and flank attack.[1]

Instead of being chosen for standing fast in the face of overwhelming odds, the Lord-Aquilors catch Sigmar’s eye for their unfettered spirit and keen minds. Some were already champions of Azyr that awoke from their reforging to find they now wear the armour of their new station while others are created as Lord-Aquilors upon their very first reforging after fighting their whole mortal lives against hopeless odds to bring destruction to their oppressors and taken to Azyr reward them with bands of immortal warriors after exhausting every ploy and trick and expended every resource down to their very lives. These experiences make them experts at coordinating guerilla campaigns and are given free rein to choose their targets and not even Sigmar knows where all of the Rangers of the Stormcast are. The Lord-Aquilors are also fearsome combatants who ride to battle upon their avian steeds to strike as hard as any spawn of Chaos and run with the speed of the wind itself.[1]

Lord-Aquilors ride upon Gryph-chargers allowing them to ride the Aetheric winds to move faster than the eye can see although this can be dangerous at times due to the shifting of the winds. They are armed with a Heavy Boltstorm Pistol for ranged combat alongside a Starbound Blade or Shock Handaxe melee combat. They also carry an Astral Compass to find the best routes to attack the enemy.[2]