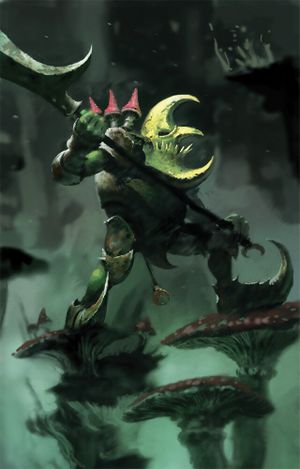 Loonbosses are the leaders of the Skraps of Moonclan Grots. Moonclan Grots respect and fear those who show Morkish cunning than other Greenskins. Thus it takes luck, cunning and the willingness to murder anyone who gets in their way to rise to the position of a Loonbosses.[1a]

Loonbosses are among the biggest, meanest and most violent of all their kind but even they are not as strong or tough as the leaders of many other forces in the Mortal Realms. Instead Loonbosses rely on tricks like feigning injury or distracting their enemies at key moments, to whipping out concealed blades, dropping stalactites on their enemies' heads or flinging handfuls of scaldyscratch spores into their foes' eyes. Certain Loonbosses have been noted in grot folklore for their unorthodox tactics such as Loonboss Wyngle of the Boomsplatta tribe who favours bombarding the enemy with exploding fungi and pots of buzzing squigglebees before the attack, Snark Gitbaiter who irritates his enemies with inane songs and insults causing even the most resolute foes to charge into ambushes and Blork of Chunderpeak who literally drowned his enemies in troggoth vomit.[1a]

Loonbosses can pick a skrap’s squigs to ride into battle and some, specially the rulers of Loonatic Squigalanches ride upon Mangler Squigs. Despite their dangerous choice for a mount they are no less cunning and, even as they cling shrieking to the Mangler Squig,s their devious battle plans they have put into place see their underlings swarm over the enemy with blades flashing. Such strategies have seen many enemy armies being shattered by the Grots.[1a]

Their position of authority alongside their brawniness and talent for cruelty and manipulation means they have access the best wargear. Many wear suits of heavy armour that have been beaten roughly into shape by the enslaved smiths of other races and rubbed with all manner of 'lucky fungi' by Moonclan shamans. Their moon-shaped loonhelms are used both as powerful symbols of authority and to make the Loonboss look 'ded fighty and a proppa loon'. For attack they wield blades known as moon-cuttas that unleash a flurry of swift blows or polearms called moon-slicers that can hack clean through armour when swung with enough malice and force.[1a]