Lileath was a moon goddess worshipped by the Aelfs of Ulthuan in the World-That-Was. In his former life, before arriving in the Mortal Realms, Teclis relied on her blessing to sustain his body in times of strain.[1a] 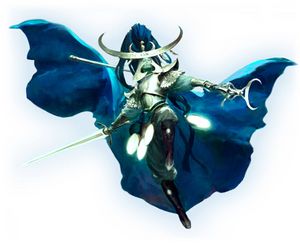 The Lunar Staff is an artefact wielded by Teclis. Given to him by Alarielle in the World-That-Was, the staff is topped by a depiction of Lileath, holding up a moon crescent.

During the conflict between Nagash and Teclis during the Arcanum Optimar, Alarielle used her connection with the staff to observe the unfolding events and lend him her strength during the climax of the conflict.[1b]