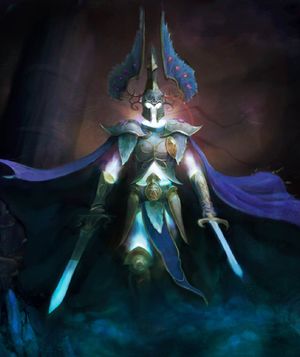 Having been slain by Arkhan the Black in the final days of the World-that-was, Eltharion's soul - as strong and luminous as it was - abided across the aeons in the form of scattered spiritual energy, avoiding the grasp of Nagash. Teclis, faintly remembering his legend, sought after his spirit, and after months of fasting and meditation finally found the soul-particles. [1]

Having developed the theory that truly potent souls could never dissipate upon the peaks of Mount Agulith, Teclis found an Aelf that bore a resemblance to his old friend, and created a simulacrum of this Aelf's body using the reproductive magics of Iliatha. Ecstatic, Teclis ordered a full war panoply reminiscent of Eltharion's old homeland's style to be crafted, also including a Fangsword and a talisman filled with magic. [1]

Tragedy struck when these soul-motes tried to enter the simalcrum, however - Arkhan's curse was so potent that it continued to affect Eltharion in his new body, reducing it to dust again. But as Teclis wept - for this task bore a massive toll upon the god - the armour got to it's feet and saluted him with the Fangsword. [1]

Since then, Teclis has tried and failed to create new bodies for Eltharion's soul to inhabit. The lack of one has not stopped his Light from fighting, however - sometimes, he even leads armies telepathically, bellowing commands into the heads of his soldiers. [1]