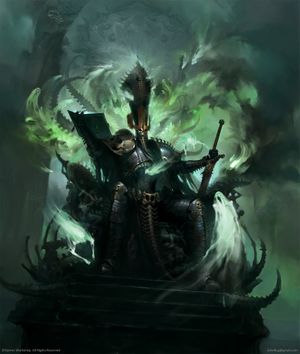 Nagash sitting upon his throne[1]

The Legions of Nagash are the numerous undead armies that serve at the behest of the Great Necronmancer Nagash, the ruling god of the Realm of Shyish.[1a]

All undead creatures serve Nagash, from lowly skeletal serfs to the most prideful of Vampire Lords. Nagash lays claim to all of Shyish, from the mist-shrouded barrows of Ullenghast to the parched waves of the Desert of Bones. Upon his seat of power within Nagashizzar dwells the Great Necromancer, feeding upon other gods of the afterlife and setting into motion his terrifying plans. Enacting his will, the Legions of Nagash are led by the Mortarchs. At the forefront of these legions is the Grand Host of Nagash, led by the Great Necromancer himself.[1a]

To ensure his domination over the Mortal Realms, Nagash turned to his great lieutenants, the Mortarchs. Each Mortarch is granted is sliver of Nagash's limitless power with which to command their own undead legions. The Mortarchs were chosen by Nagash not for their loyalty - but for their unique and invaluable skills. Should Nagash require a corruption of a mortal city via a Soulblight curse, he turn to Neferata, the Mortarch of Blood. Should Nagash's task depend on martial expertise and viscious, low cunning, he will turn to Mannfred von Carstein, the Mortarch of Night. To the loyal Arkhan the Black, the Mortarch of Sacrament, Nagash will task the most sensitive and secretive missions.[1e] In Lady Olynder, the Mortarch of Grief, Nagash sought a Mortarch who could instead inflict psychological losses upon an enemy.[4a] It was Lady Olynder who led the Legion of Grief against the Sigmar's armies to break the stormvault beneath the city of Lethis.[2a] These events led to the return of Orpheon Katakros, the Mortarch of the Necropolis, who leads the Ossiarch Legions.[3a]

Each legion of Nagash is led by a Mortarch who specializes in skills unique and valuable Nagash.[1e]