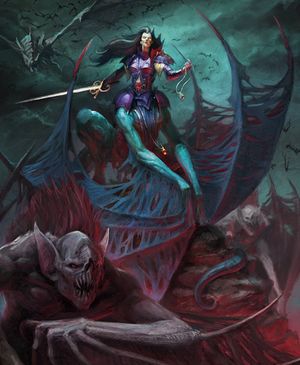 Lauka Vai, Mother of Nightmares is a Soulblight Vampire who is the queen of the Avengorii Dynasty and stands amongst the greatest of Vengorian Lords. Yet despite her hideous appearance, she holds to a creed of nobility even as she battles her inner beast. [1a]

Lauka Vai was once the finest sword of the Askurga Renkai, an order of Ghurish vampire-knights who refused to prey upon those weaker than themselves even though they had no love for them either. During the Age of Chaos, they fought against the forces of Chaos and it was during one of these quests that changed Lauka Vai's fate forever. For long she had trained herself in drawing upon the beast within while without succumbing but during a battle in the Realm’s Edge with a Tzeentchian sorcerer she was cast into a tar pit oozing with primordial Ghurish magic and emerged with her body warped into that of a nightmare. When she returned the Askurga Renkai believed her to be inherently corrupt and attacked her only to be torn apart by Vai. Horrified by her actions she fled into the dunes where she battled against wild beasts and ruinous warlords all alone for years. When she was witnessed by holdout people she fled, if she did not succumb to her hunger and fury, committing outrages that gnawed at her tirelessly when she regained sanity.[1a]

After the Necroquake the Vengorian rulers of the Avengorii Dynasty sought out the Mother of Nightmares as they had heard of her deeds and had begun to consider her a paragon of their kind. The Avengorii ideals of embracing one’s own savagery offended Lauka but it was the first true companionship she had known for a long time and she decided that they deserved a champion who would deliver them worthy war. Despite her ironclad will, she could still lose self-control and each time, she finds it more difficult to pull back from the brink of insanity. [1a]