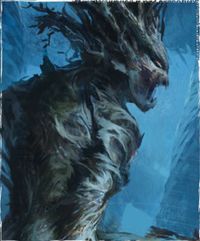 The Lady of Vines is an ancient Sylvaneth, handmaiden and bodyguard to Alarielle

She was born on the battlefield, growing from the sundered right hand of the goddess herself in the Age of Myth, where she would serve as a mighty captain of war. She was with the Queen of the Radiant Wood for long eons and saw Alarielle in many stages of her cycles of life.

During the Age of Chaos she fought in many battles against the invaders. She led Branchwyches and a thousand Tree-Revenants into battle in the ruins of Ghoremfel and recovered the Tear of Grace from the cultists of Slaanesh.[1]

When the Realmgate Wars began she was handmaiden and bodyguard to the despondent goddess in the sanctuary of Athelwyrd. Even the eldest of sylvaneth, the Treelord Haldroot was reluctant to question her path when she entered the former kingdom of Blackstone due to her position and status with the goddess. [1]

Having been forced to flee the last sanctuary and carrying the soul-pod into which the goddess had transformed herself, it was the Lady of Vines intention to plant her at the site of the Realm of Ghyran's greatest triumph. [1]

She was cut down defending her mistress from Torglug the Despised but when Alarielle was reborn, so was her handmaiden. [3a] She has fought across the realms and been struck down many times, but each time she has been regrown stronger and taller. [5]

She was created when Alarielle was in the full bloom of her war-aspect and so was full of the unquenchable certainty of victory, her soul singing with fiery determination. Her devotion and loyalty to her goddess-mother never wavered and she would defend her to the last pulse of blood-sap. [2] One of the first acts of the Everqueen when she was reborn was to grow a new incarnation of her most loyal servant. [4a][5]

When restored with her goddess in the war aspect, so the Lady of Vines was filled with martial skill and and fiery determination. [3a]

Having proved her loyaltly so many times, the Lady of Vines holds authority over even Treelords of ancient lineage. [3a]