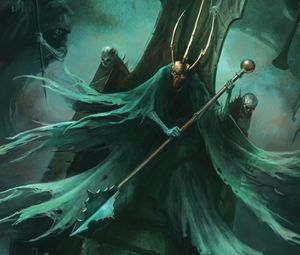 Kurdoss Valentian the Craven King is a Nighthaunt general and tactician. His dire prescence is heralded by deep and mocking trumpets, accompanied by a list of all his unspeakable deeds. He sits, voiceless and unmoving upon his hovering throne, only moving to attack any nearby foe or speaking in a low whisper to issue dread commands. This is his eternal curse, for his grave misdeeds in life. [1]

He was a ruthless betrayer who deceived, killed, and betrayed his way to a throne. Those struck down in his unrepentant quest for power included friends, allies, and entire armies. Even his own brothers were not safe from this ruthless ambition. But at the exact moment of his crowning, Nagash himself struck Kurdoss dead. Kurdoss did not worship Nagash, and instead he foolishly chose Sigmar as his patron. This left Nagash enraged, claiming Kurdoss’s soul for himself. [1]

Even in the underworld, however, as a mere wraith, his ambition was still limitless. It saw him rise, and Nagash was begrudgingly impressed by his resourcefulness and fighting skill. He was still spiteful, however, and did not wish to see him rule over an underworld kingdom. [1]

He was betrothed to Lady Olynder, Mortarch of Grief. He was bound to her and forced to obey each and every command. Despite his great power, he would never know true ruler ship. Bequeathed with many mocking symbols of his new office, as well as accompanying wraith heralds mocking and goading their supposed lord, crying aloud his wicked deeds and defamatory titles for all to hear. He had become little more than a glorified strongman, doomed to never attain the rulership he sought.[1]

He carries with him many mocking items that call back to his mortal lifetime; The Crown he sought to wear in life, a hovering throne which he longed to sit on, and a Selpulchral Staff, which when used properly could bash in the skull of Gargants.