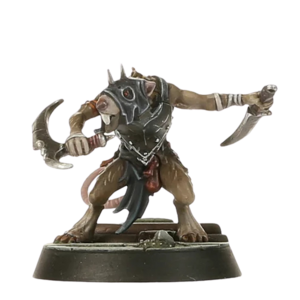 Krowch't is one of the Eshin warriors part of the Skittershank's Clawpack Underworlds warband of Clan Stryk.[1][2]

He was part of the Skittershank's Clawpack warband dispatched by Clan Stryk to investigate the Nethermaze.[1]

Krowch't is trained in the Running Death fighting style that allows him to attack with incredible speed and dexterity.[2]

Krowch't kills his foes by backstabbing them with his Bladed Tonfa and razor-sharp Dagger. He also coats his weapon in deadly Eshin Toxins.[2]

Krowch't has an intense rivalry with Skulck, who he see as an unskilled foe whose death he plans to capitalize and nudge it to climb the ranks of Clan Stryk.[3]