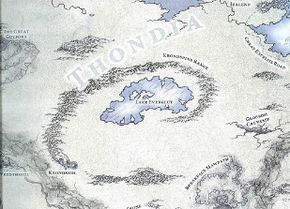 The Krondspine Range is the most extensive mountain range in Thondia, where it coils around Lake Everglutt.[1a]

Legend has it that in ancient days, the plains of Thondia were stalked by the godbeast Krond. Little is known about this primordial entity, other than it being part serpent and part wolf. It is for this reason that several Frays of beastmen still venerate lupine mutations above all. If Krond truly existed, his remains have surely fossilised into the mountains that now bear his name.[1a]

The Krondspine Range is the most extensive mountain range in Thondia, where it coils around the frozen waters of Lake Everglutt. It is pock-marked by tribal strongholds and ancient boneyards. Primative peoples have long scraped out an existence in these unforgiving climbs, forced to flee there long ago to escape the dominion of Chaos. To this day, their descendants battle the ogor hunters and savage greenskins that roam the passes, but it is the dead they fear above all. Many tribesmen fell beneath daemonic blades before reaching the safety of the peaks, and their spirits are said to still haunt the deep caves and low valleys. These phantasms are touched by bestial energy that has always surged strong through the Krondspine Range. On the darkest nights their howls of fury are enough to stop the heart and chill the blood.[1a]

The Krondspine Range is the is where the first Krondspine Incarnate of Ghur was first sighted, thus giving the Incarnate its name.[1a]