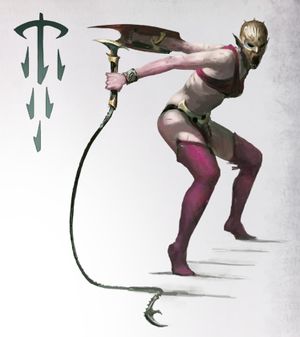 A Sister of Slaughter of The Kraith

The Kraith is a sect of the Daughters of Khaine that even amongst its own is known for its pure bloodthirst.[1b]

Known as the Crimson Cult, the Kraith seek to spill blood and little else, so much so that they have caused severe problems with erstwhile allies not helped by their belief that all others - even other Sects are inferior and worthy only to provide blood to bathe in.[1b] They especially look down on the Draichi Ganeth and their cult of execution. They see their restraint as barely disguised weakness. For the Kraith, its only the kill that counts, not the way it was achieved.[3b] They are perfectly willing to use poison as long as the kill is completed.[1c] Among the blood-thirsty Kraith, the Slaughter Queens are held in especially high regard, the leaders of Kraith war coven often earn the title of Blood Queen.[3d]

The Kraith have no temple, instead their war covens travel the realms, offering their services as mercenaries, to clear the lands of marauding monsters or tribes of orruks, but this is all part of the endless pilgrimage for the god of Murder.[1c] Many allies have come to regret hiring the Kraith once they witnessed their bloodthirsty post-battle rites, and even the most hardened warriors of the Stormcast Eternals could not repress a shudder.[3c]

Their hotheadedness, and violent responds to any perceived insults has drawn censure from Hagg Nar, but their effectiveness as brutal killers has prevented any more extreme forms of punishment, for now.[3c]

Sent by the High-Oracle Morathi herself, Hag Queen Tayrathi of the Kraith travels to Invidia during the Age of Chaos to reclaim the Crimson Scianlar, a dagger tempered in the blood of Khaine. In the Caverns of Aoch deep below Invidia she meets the Exalted Deathbringer Ugtai and his warband. The sound of fierce fighting echoes trough the jungle caverns, but in the end Tayrathi retrieves the dagger from a pool of boiling blood and slays Ugtai.[3a]

They have fought wars against the champion of Slaanesh, Vaela Angelica. [2a]

In the Age of Sigmar a war pilgrimage was hastening to aid Alarielle against the forces of Nurgle when they were ambushed by Idoneth Deepkin who they quickly fought off. As they retreated the Kraith force followed them into the mist, intent on further bloodshed.[1a]