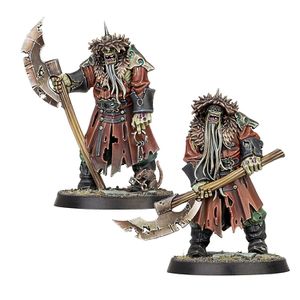 Kosargi Nightguard are undead Ogor bodyguards of Radukar the Wolf. They are resurrected as loyal in death as they were in life - their unnatural resilience and imposing bulk serving to dissuade any who would target their master. [1][4a]

During the invasion of the city of Mournhold by the Khornate Daemon Prince Slaughn the Ravenor, living Kosargi ogors accompanied Radukar the Wolf's defence of the city. Upon Radukar's internment as Mournhold's leader, they remained as part of the city's military[2]

Upon Mournhold's rebirth as Ulfenkarn, the Kosargi Nightguard were resurrected with foul necromantic sorcery, and even in death still remain as part of the city's defences - serving as the elite bodyguard of The Wolf himself. [2][3a][3b]

Kosargi Nightguard wield the same giant Bardiches they made use of in life, with which they carve great bloody swathes through the enemy.[3a][3b]