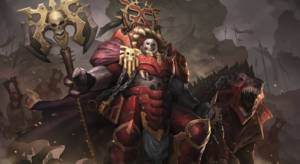 Korghos Khul is the mightiest Lord of Khorne on the Mortal Realms. He is the champion and leader of the Goretide Bloodbound warband, first amongst the barbaric hordes that ravage the Great Parch and an army of man-eaters that follow Khorne.[1][7a]

Originally the Aridian Spear-carrier, a bridge between them and his people the Khul, he has conquered the whole Realm of Aqshy. The fear and the despair of Aqshyan people named him the Bane of Aqshy to describe the way he charges the closest worthy opponent to him.[1][7a][8a]

During the start of the Age of Sigmar few know from where he came from, but everyone knows who he is.[1]

While in the court of Aridian, Athol Khul was noted for his pale skin, muscular body, and the sculpted bronze breastplate that he wore.[8a] 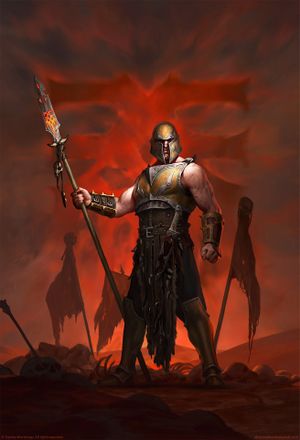 Born the son of Norod Khul, Athol Khul was a member of the Khul tribe. He attended the Red Feast at a young age where he saw his uncle the then-current Spear-carrier kill five men and women.[8b]

By the end of the Age of Myth, Athol was the Spear-carrier, the champion of Humekhta III, Prophet-Queen of Aridian.[8a]

After a duel with a Aquita-born Bataari, Serleon the Peerless Blade, over the fate of a thieving Bataari merchant Williarch, an emissary arrives claiming Williarch was gathering the Tithemasters' tithe due from the Aridians. As punishment for impeding the gathering of the tithe, the emissary demands double the tithe, thirty Aridian young, and Athol Khul as Williarch's new champion. Athol refuses and attacks the emissary, who turns out to be a powerful sorcerer known as Rosika. They duel, Williarch is killed by Athol, and Rosika flees.[8d][8e][8f]

After warnings by the now friendly Serleon as well as the Aridians of the dangers of the Tithemasters and knowing that they will return to seek vengeance Athol sets out to gather an army of allies to defeat the Tithemasters before they return.[8e][8f][8g]

Athol, guided by mad dreams of blood and death, headed to a mountain where he met Lashkar The Bloodspeaker. Lashkar told Athol the true origins of the Khul as well as his own role in bringing the Khul to Aqshy. Lashkar then bade him to find a Beastman to kill over the skull rune Lashkar had discovered. Athol did so and completed a ritual whereby he pledged his life and soul to Khorne. This brought Khorne to speak through the ritual-changed body of Lashkar, there Athol sealed a pact with the Chaos God. Athol would receive immortality and the power to defeat the Tithemasters in exchange Khorne would claim his skull if he fell in battle. Lashkar then gave him his new name, the ancient name of the leader of the Khul, the Bloodking, Korghos.[8i][8j][8k]

Lashkar, having received a vision of the Red Feast on Aqshy Clavis Isles called for by Threx Skullbrand, led Korghos Khul there as the last champion to reach the isles.[8l]

Under a blood moon in a dedication ceremony hosted by Threx and attended by fifteen champions of the various tribes, Korghos Khul asked for them to unite under his banner against the Tithemasters. When they showed now interest Korghos offered his tribe as slaves to whoever defeated him in combat on the condition that if he won their tribe would join his battle against the Tithemasters. When the Highest Chieftain, Skolor Helfir, of the Direbrands one of the largest tribes of the Flamescar Plateau refused Korghos killed him. Then he and his allies murdered the Sigmarite priests who accompanied some of the champions as well as any others who opposed Khorne's will. Korghos issued his challenge again this time before nearly a thousand champions and this time the winner would also receive the cup of blood, which was placed at the summit of Clavis Volk. Korghos gradually fought his way to the top, contributing significantly to the 888 death toll that destroyed the realmgate at the center of the isles and turning it into a gap in reality from which legions of daemons came through.[7a][8m][8n][8o][8p]

He became part of the first chaos' servants to invade the Mortal Realms. During his extended life, he accumulated countless battles and experience, turning him into a feared butcher of butchers.[3][4]

After he conquered the Tower of Wrath he seized control of the Goretide and cast Aqsharya down in flames, the first steps in conquering the whole of Aqshy for Khorne.[1]

As the leader of the Goretide, his barbarian horde of man-eating fellows became the first amongst the hordes of the Great Parch. He conquered all the land between the Vostargi Mont and the Vitriolus Reach, and renamed the southernmost region of the Great Parch as Khul's Ravage. He ransacked the Isles of Gaitan and extinguished the ever-flaming pagodas with the blood of the warrior monks that guarded it. He raised the Jagtooth Fort to protect the southern coast of the the region named after him and his slave routes. After these conquests he started to build the Red Pyramid of Khul, a structure made of a million skulls of the tribe north of the Brimstone Peninsula. Because of the frequency of his battles so much blood was spilled that the land between the Brimstein Hearthlands and the Flamescar Plateau formed lakes of blood and the ground became tough, cracked and brown, now renamed as the Scablands.[7a]

He slaughtered the Direbrand Tribe, which Khorne rewarded him with the Flesh Hound Grizzlemaw. Under his command the Goretide toppled the Scorched Keep, the last token of resistance in the Brimstone Peninsula and went on a triumphant rampage that turned Blisterfell Peak and Carbidium red with the blood of their peoples.[1]

Battle for the Brimstone Peninsula 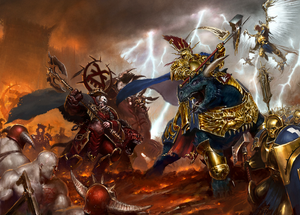 The very first battle that started the Age of Sigmar was between this warlord and a new type of warrior dropped from the sky in lighting bolts, the Stormcast Eternals. The Goretide had been bored of hacking and slashing weaklings, so Khorgos smiled as he saw the new arrivals. In this battle he met his old rival, Vendell Blackfist, a warrior of a the Direbrand tribe he had previously slaughtered and was rescued by Sigmar, now turned into Lord-Celestant Vandus Hammerhand of The Hammerhands chamber of the Hammers of Sigmar Stormhost and who could finally take his revenge. As the rage and the tide of battle surrounded the two warriors, Khorgos Khul charged towards Vandus Hammerhand for a bloody and glory kill. But despite his blessed Greataxe which thirsted for altering Vandus' fate, it was the Lord-Celestant who won the clash, forcing Khorgos to retreat.[3]{{Fn|4}[7a]}

He was eventually defeated and banished at the Red Pyramid of Khul.[7a]

This defeat haunted Khul. Not only did he fail to slay Vandus with all the gifts he acquired from his god, but he had to retreat, to flee like a coward. He hunted Vandus and he never rested until he reached his target. He found his target at the flames of Aqshy's mountains. But he was betrayed by the Daemon Prince Skinkstein from the Infernia Orb. Furious and frustrated, Khul fell into an indescribable rage and it was said that it was like Khorne who slew the insolent Daemon Prince to punish him for leaving the battlefield and the Goretide, giving time for Khorgos Khul’s prey to flee. Since this event, Khorgos took the control of Skinkstein’s demonic legion and swore he would slaughter any one who steped on his path. Since this day, the power of the Goretide was second to none of Khorne's legion. [3]

Battle for the Orb Infernia

He managed to take revenge on Skinstein when Archaon himself appeared before him on the Ashlands region and opened a gate for Khul and his army to the Orb Infernia where Skinstein resided.[5a] Breaking to the fortress of the hated daemon prince Khul killed Skinstein in a personal duel and so gained obedience of Skinstein's legion of daemons. After that Khul rampaged through the Orb Infernia, uniting the daemons of all Chaos Gods to great army that crushed the Slann Starmaster Lord Xen'phantica and his Seraphon armies. Khul killed Starmaster himself and so his triumph managed to be eternal.[5b]

After Korghos Khul conquest of Orb Infernia, the orb becomes his power-base for him and his daemons legions, raining blood whenever the forces of Khorne muster for a counter-offensive. This comes at a time when civilization begins to reestablish itself in the Great Parch, something which Khul sees as a boon as it gives something for his legions to attack.[7a]

But after some time Nagash awoke and used his mysterious Red Mists to unleash a time-changing power upon the Orb Infernia. As a result all Khul's deeds were reverted, Skinstein, Xen'phantica and their armies were resurrected and the situation returned to the start of the conflict.[6][6a][6b]

Korghos is known to have the ability to submit anything that crosses his sight, to have a strength capable of breaking any mighty will. Nothing could stop him from conquering Aqshy and slaughtering the population, while some of the people of Aqshy turned to Khorne. Khorgos Khul wreaked havoc and it is told that he has sent millions of skulls to the hateful blood god.[3]

This immortal conqueror was blessed by three of Khorne's gifts: