From Age of Sigmar - Lexicanum
(Redirected from Knights-Excelsior)
Jump to: navigation, search 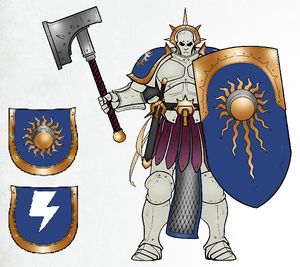 A Liberator of the Knights Excelsior.

The Knights Excelsior are a Stormhost commanded by the Shining Lord, wearing white and blue armour and blue shields. They march to battle surrounded by chains of lightning. "For the Glory of Sigmar!" is their motto. To them only two kinds of people exist, those who are Good and those who are Evil; and only the complete eradication of the latter is acceptable.[1][6][14a]

They are disciplined warriors with a martial philosophy that emphasises the Stormhost over the individual and have a preference for tactics and doctrines that have been proven in combat over risky experiments. This is done in part to ensure that individual members of the Stormhost do not think of themselves as individuals so that they are numb to the atrocities they commit to rid the Mortal Realms of evil.[6][14a]

Early in the Age of Sigmar they besieged the skaven Parasite Engines that had been devastating the Scabrous Sprawl in the Realm of Ghyran. [9a]

According to Katalya Mourne, they were welcomed to the Jade Kingdom of Verdantia by the Shryke tribe at the Gate of the Gods Realmgate. They then drove the tribe from their homes and killed them all. [10b]