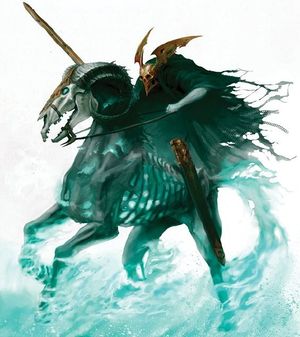 Knights of Shrouds are the heralds of Nagash, sent to bring the word of the god of death to those that defy him. [1]

A Knight of Shrouds is a general or other war leader who betrayed their own people. Perhaps this was in the hope of personal gain or just a desperate hope for mercybut in the eyes of Nagash this does not matter. As punishment, he shackles their souls to lead his armies. [2]

He commands masses of undead, specially the Nighthaunt armies, with a disembodied voice that rings over the moans of the deceased, seeking to slaughter the living and bring disaster, as he is dread omen given form. They have traded their souls with Nagash so they could become the generals of an undead host.[1]

For these tormented knights, it does not matter how many living rivals they force into making the same choice, it will never silence the doubt gnawing at their hearts. [2]