From Age of Sigmar - Lexicanum
(Redirected from Khinerai)
Jump to: navigation, search

The Scáthborn, also known as the Trueborn or Shadowborn are the product of souls taken from Slaanesh by Morathi.[2a]

Here, Morathi combined enchantments, shadow magic, the souls' own bitter anguish and hatred, and even her own blood to create a new race of beings. Some, like the Melusai were horrific, serpentine mirrors of Morathi's true form, others, like the Khinerai, were winged and clawed. These Scáthborn became Morathi's handmaiden, her most trusted servants and aids in her endeavors. Only they are allowed in the underhall of Khruthú deep below Hagg Nar.[2a][4a]

For the longest time, the Scáthborn were hidden from the Mortal Realms. Their strange form either hidden away in dark temples, or obscured by powerful shadow magic. Many outsiders thought of them as ordinary, but disturbingly devout aelves. But since her ascension, Morathi has been much more willing to show her Scáthborn for all to see. Proclaiming them heralds of a new age, and proof of Khaine's return.[2b] Most sects treat them as their elite warriors, outranking most of their unchanged khainite sisters. Most revered of them all are the members of Morathi's own honour guard, the vaunted Vyperic Guard.[2f][4a]

While Morathi's ascension has put the Scáthborn out of the shadows and into the light of the Mortal Realms, the ritual needed for her apotheosis also saw the great cauldron of Máthcoir shatter, a vital component in the creation of her Scáthborn. The exact damage is only known to Morathi and her most trusted servants, but rumors spreading in Hagg Nar speak of malformed monstrosities birthed by the splintered cauldron, hiding in the lowest depths of Khruthú.[2c] 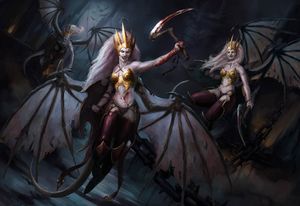 The Khinerai are a race of twisted winged aelves, descending from the skies on their membranous pinions at the behest of their Shadow Queen, Morathi.[3]

Born from the magical cauldron Màthcoir, the winged Khinerai roost among the great peaks of the Ashspires in the temple-city of Hagg Nar.[1b] While all Khinerai are born in the Khainite capital, its not the only place where they can be found. Each shade solstice, during the ritual of Gristead, Morathi chooses flocks of Khinerai to send out into the realms, to sects and covens favored by her.[2e] The Khelt Nar especially are known for making great use of these winged warriors of Morathi. Their capital of Ironshard is surrounded by dozens of tall brood-nest towers.[2g]

The two most common kinds of the winged Khinerai Harpies are: 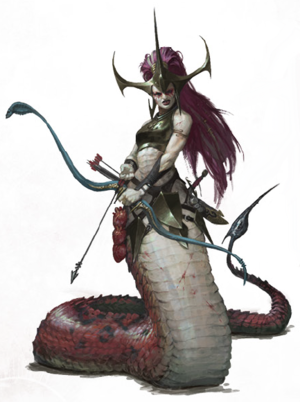 Birthed from the great cauldron Máthcoir, dark magic and drops of Morathi's own essence, each Melusai is imbued with magical powers and utmost, unshakable faith in their creator, as well as a burning hatred for their tormenter Slaanesh.[2b]

Temple Sects are blessed with the presence of sisters. Because of their changed appearance they were kept hidden. Either out of side in the inner sanctums of khainite temples or cloaked in illusory magic. These enchantments allow the Melusai to appear in the form of a normal aelf, wandering among their sisters, and acting as eyes in the temples for their queen, dealing with any that might question the high Oracle, her intentions or her actions.[1c]

Melusai can use their scáth touch to turn their foes into pertified crystal statues, still fully painfully aware of their new state.[4b]

With her ascension to godhood, Morathi has become far more willing to openly show her mightiest warriors. While there are rumors of additional forms, three kinds are the most commonly found across the battlefields of the Mortal Realms[2b]: