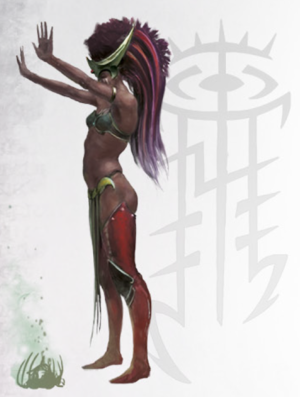 A Witch Aelf of Khelt Nar

Khelt Nar is a sect of the Daughters of Khaine.[1b]

The war hosts of Khelt Nar prefer to destroy their enemies with a series of quick hit-and-fade attacks. The first attack aims to quickly strike the enemy with cursed Kuirath blades, leaving them confused and stumbling, open for a devastating second strike by the Daughters of Khaine.[3b] During these attacks, the warriors of Khelt Nar are often accompanied by swooping swarms of Khinerai. Many flocks of these winged warriors have made their home among the dozens of brood-nest towers surrounding the temple-fortress of Ironshard.[3b]

Morathi herself founded the sect with the construction of their shrine, the Ironshard atop a flat-topped mountain of iron known as Rothtor. Her magical might transformed the ferrous mountain top into an imposing fortress, protected by layers of walls, strongholds, and powerful shadow magic. From there temple-fortress, the Khelt Nar quickly grew into one of the most notable sects of the khainite sisterhood.[3a]

Contributing to their rapid rise has been the secret of Kuirath. Blades crafted from veins umbral metal running throughout the Rothtor, and infused with powerful shadow magic, an obfuscating curse. Even a single cut will leave the victim dazed and disorientated, making them easy prey for the skilled blade masters of the Daughters of Khaine.[3a]

Time and time again, the strength of their walls and their blades has been tested, not just during the bitter wars of annihilation against the local Bonesplitter tribes and the many monsters of Ulgu.[1a] But also against the forces of the Ruinous Powers. Six times have the forces of Chaos located the hidden fortress of the Khelt Nar, and laid siege to their temple, but they still stand. In return the members of the sect have developed an intense hatred against Chaos, even by the standards of the Daughters of Khaine.[3a]

During the Age of Sigmar, a truly enormous Mega-Gargant known as Gruntlefist the Great, was slain by a War Coven from Khelt Nar. His thick skin allowed him to shrug off even the mightiest blows. Until the arrival of the Khelt Nar. Ten-thousand cuts slowly infused the Gargant with mind-numbing shadow magic, and after ten-thousand cuts, the beast was brought down. The blood-thirsty Khainites then flayed the still living Gruntlefist, making sure to capture the gargants blood in their Cauldrons of Blood.[3c]