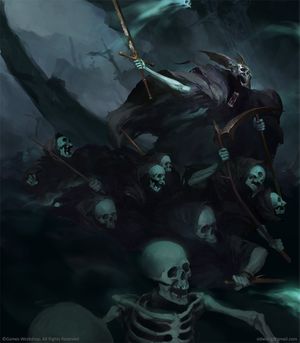 Image of Keldrek during the Malign Portents

Keldrek is a Malignant, a Knight of Shrouds, who serves Nagash having refused to serve Sigmar as a Stormcast Eternal[1]

He betrayed his people to Nagash, the God of the Dead and was transformed into a wraith. [2]

In the Time of Tribulations, he was tasked with directing vast legions of skeleton labourers to gather vitrified realmstone to construct a vast nexus of power in the form of an inverted pyramid in the Realm of Shyish[1]

He is armed with a Sword of Stolen Hours, which drains the life force of enemies and transfers it to a hourglass that hangs about his neck[2] thus increasing the lifespan of Keldrek himself.[3]