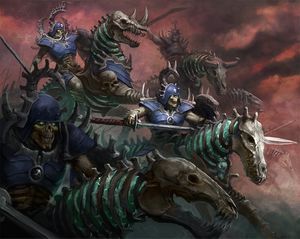 Kavalos Deathriders are the shock cavalry of the Ossiarch Bonereapers, sent to destroy, hack and trample the enemies of the Ossiarch Empire until there is nothing left of the enemy but dismembered corpses. They are rarely seen in times of peace and typically, if a mortal sets eyes upon them his death warrant has already been signed. They are a favoured asset when punishing those who would rebel against the Ossiarchs’ claims of supremacy, especially if the transgressors choose to flee rather than to fight. While their prey may have a head the focused and indefatigable riders of the Kavaloi who are unhindered by the needs of mortals will eventually catch up to them. Across the Shyish Innerlands, to say that one ‘runs from the Deathrider’ is to admit to pursuing a task doomed to inevitable failure. [1]

Their steeds are weapons of war in their own right, the Kavalos steed is a bone-wrought monster possessed by several blended spirits mainly created from the souls of faithful stallions, untiring carthorses, foul-tempered rhinoxen, and Ossian creatures such as bleaklake crocodiles and the ferocious flightless birds known as dyatri merged to give the Kavalos steed the right mix of savagery and determination. But not all of the spirits that animate these creatures are those of animals and Ossiarch leaders who anger Nagash may have their souls rendered down to become part of a Kavalos steed and are allowed to retain just enough sentience to realise their predicament which drives them mad with hatred at having been remade as riding beasts rather than true warriors. Kavalos steeds can perform physical feats that would wound or even kill a living creature as well as carry out manoeuvres that would send a troop of galloping horses tumbling to the ground in wild disarray. The steeds are also extremely durable protected by an outer exoskeleton which covers even more layers of hardened bone. [1]

Kavalos Deathriders are armed with a shield alongside either a Nadirite Spear or a Nadirite Blade depending on the situation. Their mounts constructed with fang-lined jaws, prehensile tails that extend from its enlarged spine end in jagged tips and nadirite-shod hooves. The Necrophoros are instead equiped with standards. They are also given specially crafted carrion birds that lend them a portion of their Mortisan creators’ witchsight, allowing the Kavaloi to track their foe’s soul-spoor.[1][2]