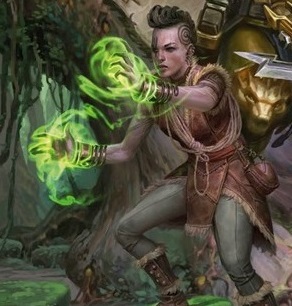 A teenage but tough looking woman, tattooed and pierced across her russet skin, her hair shaved at the sides and the centre swept into a spiked crest.[1a]

Her tribe was virtually wiped out by Skaven and with Danya and Tievan, the last remaining warriors who had been fighting other minions of Lord Ungholghott she sought vengeance against the ratmen. However the skaven proved too numerous and her companions and their tattakan mounts were slain. [1b]

She was saved from the mass of Plague Monks and a Rat Ogre of the Clans Pestilens by Neave Blacktalon and reluctantly became her companion. [1a]

She is able to gather and project powerful beams of life energy by using the copper vambraces that she wears over her forearms.[1a] and her mount is Ketto, a Tattakan. [1] Like many of the kingdom, she has become highly resistant to the diseases of the followers of Nurgle. [1b]