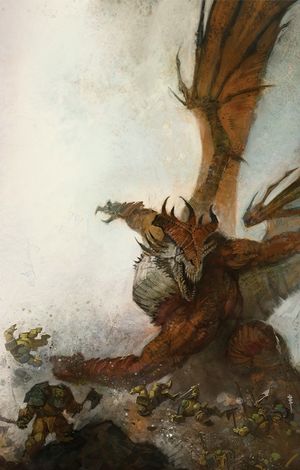 Karazai, The Scarred is one of the remaining Draconith princes alongside his brother Krondys. When the Draconith Empire was destroyed by Kragnos, he battled and helped defeat the God of Earthquakes after which he launched a bloody war of vengeance against the servants of Kragnos. With the dawn of the Age of Sigmar and the Era of the Beast he has joined forces with Sigmar in order to continue his bloody crusade.

Before the pantheon of Order came to be, Karazai and his brother Krondys were princes of the Draconith Empire. However, he was overshadowed by his brother who ruled as the Lord of the Draconith Empire and despite being famed for his lustrous scales he found no joy in it. The two princes were scholars, taking an interest in lore that eventually lead to them learning of the Slann's existence, as well as how to telepathically communicate with them.[2c] When Kragnos' war against the Draconith nearly drew their people to extinction, the two princes desperately entered a trance-like state, seeking Lord Kroak's aid. A bargain was struck; in return for the assistance of the Seraphon, the drake-lords agreed to give their remaining eggs to their voidfaring temple-ships. [1a][2c]

Karazai joined his brother and the Slann who lured Kragnos atop Twinhorn Peak. Whilst the battle initially went in Kragnos’ favour, he was soon defeated, being sealed inside the peak but not before Kragnos struck Karazai with the giant Dread Mace snapping the Draconith's horns and leaving a hideous wound. After the battle, a grief-stricken Krondys went into exile but Karazai instead of mourning launched a bloody crusade of vengeance against the followers of Kragnos across Ghur and then into other realms.[1a][2c]

During the Age of Chaos Karazai extended his crusade against Daemons that were invading the realms to the point it is said that there was not a single day when his talons were not bloodied by the blood of Greenskins or Daemons. A millennia of war and the predatory essence of Ghur twisted the once-glorious form of the Draconith prince leading him to fully abandon sorcery in favor of violently tearing apart enemies.[2c]

During the Era of the Beast Karazai joined Krondys in leading a massive host of Draconith that darkened the glow of Mallus and after weeks of long negotiations mediated by Stardrakes swore the Pact Draconis as it aids his own bloody crusade. [2b][2c]

He considers his brother a senile fool that retreated in shame and only fights alongside him to outmatch him. He also prefers to join the eve of battle rather than lead the armies of Azyr and while he is not turned away many Stardrakes and Dracoths find themselves uneasy in his presence. However many younger Draconith have begun to admire him as living proof of the fact that not all of their forefathers gave up the fight, finally giving Karazai the respect he desired for many millennia.[2c]

Krondys is armed with natural weapons of the Draconith such as an annihilating jaw, massive ruinous talons, and a calamitous tail. Being among the greatest Draconith lords he can unleash a blazing tempest, vortexes of scouring flame that disintegrate those caught in the blast. [2d] Unlike his brother Karazai no longer casts spells, having given up sorcery in favour of sheer violence. [2c]