From Age of Sigmar - Lexicanum
(Redirected from Jabberslythes)
Jump to: navigation, search 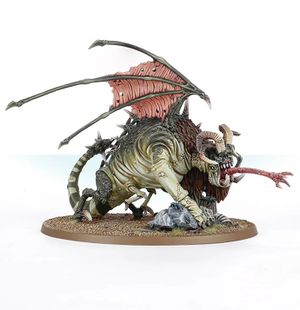 A miniature of a Jabberslythe.

Jaberslythe are repugnant Monsters of Chaos, a sickening fusion of toad, sludge-drake and many-limbed insect, grotesque conglomerations of monstrous body parts that represents all that's vile and unwholesome in nature and magnifies it hundred fold. Their visage is so twisted and grotesque, not even the clearest pools of water will show their reflection and to stare upon it is to be affected by its aura of madness capable of driving a man, even a season warrior, immediately and irreversibly insane. It attacks it's foes with a slythey tongue, vorpal claws and spiked tail and is able to use it's wings to fly. Whenever it is attacked it spurts forth acidic blood that melts, corrodes and causes horrific burns on whoever did the deed.[1][2]

They inhabit swampy lairs that they lurch forth from to hunt.[1]