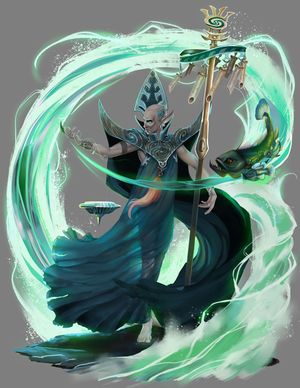 Isharann Soulscryers are one of the many fanes, branches, of the Isharann, one of the three castes of Idoneth Deepkin society.[1a][1c] They are the navigators and priests of the Idoneth Deepkin enclaves, they divine the targets of the soul raids, guide travellers through the Whirlways and communicate with other Soulscryers in distant enclaves. In battle Soulscryers often accompany the Idoneth phalanxes, directing them unerringly before and during the battle, making sure they claim the strongest souls.[2a][3][4a]

The Soulscryers are diviners, navigators, and arcane trackers within Idoneth Deepkin societies, with their abilities they can determine whether a newborn Idoneth will be an Akhelian, Isharann, or a withered soul Namarti. Their ability to see and map out souls has also made them vital components of the Idoneth Phalanxes, as they can see which creatures encountered in raids or battles have the most valuable souls. Their powers have also ensured they excel at their other duties which include communicating with their counterparts in distant Enclaves, navigating travelers through Whirlways and the utter dark of the depths, as well as selecting the next targets of Akhelian raids.[2a][3][4a]

Every Idoneth Phalanx is comprised of three components. The main body of Akhelian and Namarti battalions, an Isharann Soul Warden who serves as a battlefield co-ordinator from the safety of the Enclave, and the phalanx's triumvirate commanders. These commanders include an Akhelian King, an Isharann Tidecaster, and of course an Isharann Soulscryer'. The Soulscryers duties include serving as battlefield commanders and determining what targets to raid. They can use their powers to lead the Idoneth through hidden paths in the shifting ethersea, allowing for unexpected ambushes, and find and light up the souls of most potent souls on the battlefield so they can become easy targets, like a beacon in a fog, to the Idoneth armies.[1d][3][2a]

Ethereal manifestations of shoals of Scryfish also follow them into battle, etherfish that aid their masters by pointing the way or vigorously defending them by spitting spikes that jut from their maws at foes.[1e][3][4a]

Using their Cyfar compasses, large bowl-shaped objects, and Dowserchimes, that hang from large poles with an Idoneth rune atop, the Soulscryers can map out the souls of those around them and even track any given soul across the Mortal Realms, as well as mapping the darker corners of a soul. Their weapon of choice is known as the Finger-claw, made from the razor teeth of Allopexes, that can slice through flesh.[1e][2a][3][4a]

As priests they wear ornate robe swith a large collar and headpiece. These robes are held together with a large set of metal shoulderpads that protect his back and is curved into two points with carved Idoneth symbols. Their ears are pieced and wear bands of metal on their arms.[3]