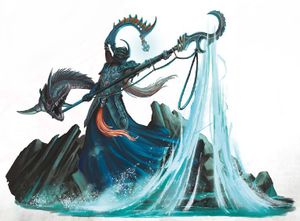 Isharann Soulrenders are one the many fanes, or branches, of the Isharann, the magically gifted caste of the Idoneth Deepkin. The Soulrenders collect the souls of the fallen and are responsible for gathering souls during the Idoneth's raids on the surface.[1a][1b][3]

Soulrenders are capable of removing souls from other lifeforms and it is they who collect the souls during raids on the surface. Once they return to their undersea strongholds, these souls are stored in the chorilleums, so they can be later seeded into newborn Namarti.[1a][1b][2a][3]

Soulrenders serve in the main body of the Phalanxes, the military formations of the Idoneth Deepkin, as commanders of the Namarti battalions. They are unusual amongst their caste as they often train in combat alongside the Akhelian caste and are known to be one of the most combative of the Isharann. With their magics and lurelights, they can use captured souls to heal their subordinates and even potentially revive recently slain ones.[1b][2a][3]

While in battle it is their task to capture the souls of those slain by the phalanxes.[1b]

Soulrenders go into battle with talúnhooks, scythe-like, hooked polearms longer than they are and ending in a wicked serrated blade that curved in a evil hooks. These are capable of ripping flesh from bones. Atop these polearms there is a hangman's knot, a rope-catch, that is ideal to capture foes that attempt to flee ensuring that their souls are captured.[1b][1c][2a][3]

His helmet is partially-closed with a metal structure atop which ends in a gangling Lurelights. This talisman bathes them in a fey glow that draws and absorbs the souls of both allies and enemies. These captured souls can then be used to reinvigorate fallen Namarti.[1b][1c][2a][3]

They wear thick metal plate with large shoulderpads in the shape of nets and giving them aggressive silhouettes. The bottom of their ensemble is a large robe with embroidered waves and heavy boots. They are more heavily armoured than the Namarti they fight alongside.[3]

They are often accompanied by Rakerdart bond-beasts, ethereal manifestations used to combat which dart around at their feet, stabbing prey with the plates along its body and a large spike to ensure they cannot escape.[1b][2a][3]