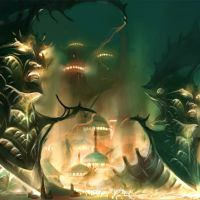 Priom, one of the grand cities created by the Chorralus

The Chorralus are one of the many known fanes, or branches, of the Isharann, the spell-weaving caste of the Idoneth Deepkin. Through the use of song, their natural talent for magic, and the teachings of their Enclave's Túrscoll, the Chorralus craft the living structures in which the Deepkin reside, with coral and shell being the most commonly used material. These abilities have made the Chorralus the builders of Idoneth society.[1a][1b]

Much like other Aelven spellcasters the Isharann are born with an innate ability to use magic. Isharann spend their formative years in the Túrscoll of their Enclave. Those who choose to become Chorralus can sing to and shape living matter into structures big and small, in fact is in the Chorralus who are responsible for creating the settlements of Idoneth.[1a][1b]

One of the greatest creations of the Chorralus is the city of Galanaur, the enclave of the Nautillar, which is considered even grander than the city of Priom. Through their songs they shaped the broken shells and other calcific debris in the Maithnar Sea of Ghyran into the grand city. Though unbeknowst to them the vast carpet of shells rested not upon the seabed, but on the back of a Great Scaphodon.[1c]