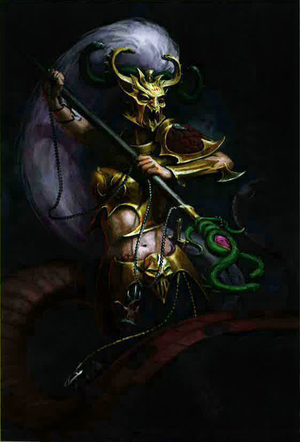 Melusai Ironscales are cruel and cold-hearted Scáthborn. Born for war and blood-shed, they lead their sisters on the battlefield, paving a a bloody path trough their enemies.[2c]

While each Melusai shares Morathis burning hatred against their tormentor Slaanesh, the Ironscales need for revenge burns especially bright. Clinging to this feeling allowed these souls to retain their sense of self, even inside the dark princes belly. Infused with dark magic, and protected by ancient wards, these reborn souls form a new generation of elite, warrior champions to serve in Morathi's armies.[2c] The Ironscales serve in the highest positions of the khainite cult, from respected advisors on Morathi's war council, commander of the elite Vyperic Guard, to leading whole war covens in their goddesses name.[2c]

Each Ironscale is equipped with a kragath war-mask, not unlike those worn by the Blood Sister, and a curved sacrificial dagger. But their most remarkable weapon are the serpent-crested staves known as keldrisaíth. These enchanted weapons allow the Ironscale to channel deadly bolts of dark magic, or to rip open their foe in one quick motion. When activated by the right words of power, the staves serpents become animated, lunge at the enemy and tear out the heart of their unfortunate victim. Offering the still beating heart as a sacrifice to their god of murder, the blood magic of the Ironscale can drive a whole battleline of Scáthborn into a violent frenzy.[2c]