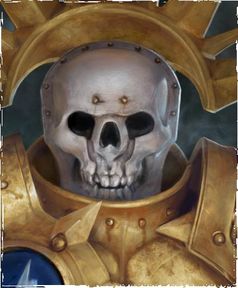 Ionus Cryptborn is a Lord-Relictor, a Stormcast Eternals of the Hammerhands Warrior-Chamber of the Hammers of Sigmar Stormhost. He was originally called Eonid ven Denst, a prince from Shyish. He carries the aspect of the grave with him and few rest easy alongside him. With the power to summon and bind the storm at will, Ionus is a redoubtable foe.[1][2]

All around the Brimstone Beachhead there are statues built in his image.[5]

Eonid ven Denst was once a Amethyist Prince[4] of the Prime Innerlands, a secret he only shares with his fellow Lord-Relictors. He once slew the many-skulled Hydragor that wreaked havoc upon the courtiers of King Thanator's manse. During the Days of Shattered Bone he was the only one that had the courage to speak against Nagash.[1][2]

Taken by Sigmar, he was reforged as Ionus Cryptborne, Lord Relictor of the Thunderstrike Brotherhood, an Exemplar Chamber of the Hammerhands and was part of the first strike in the Realmgate Wars at the Brimstone Peninsula in the Realm of Aqshy.[3] Noticing his arrival, Nagash taunted him with visions of his dead wife in torment - claiming that A tithe is owed. A tithe shall be given. A soul for a soul.[4]

Vandus Hammerhand can see past his grim and dolorous demeanour and see the hero beneath, both stormcast having a strong bond of brotherhood with each other.[1][2]