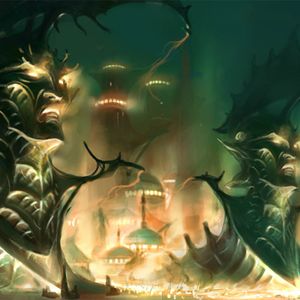 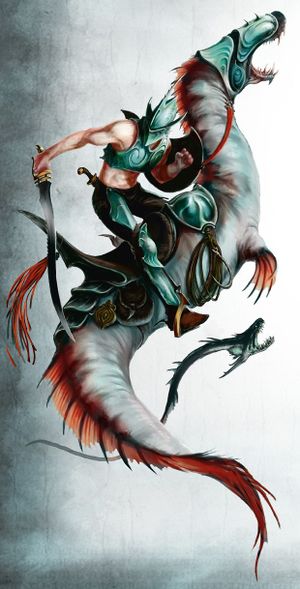 The Ionrach Enclave is one of the greater enclaves of the Idoneth Deepkin and they consider themselves First amongst their kind. [1c] Amongst the deepkin they are considered somewhat less isolationist than the other enclaves, even on occasion reaching out to non deepkin.[1c]

Their colonies, outposts and fortifications can be found in every one of the Mortal Realms with their glittering capital still being the first city they created in the depths of the Maithnar Sea.[1c] Their expansion has been helped by the fact that Magic users are relatively common in Ionrach.[1f]

The Deepkin of the Ionrach live the longest of their race and it was they who first unlocked the secrets of the soul and created the Namarti. [1c] Like some other enclaves, the Ionrach do not usually take the souls of children when raiding, and leave adult victims in a coma rather than slaying them outright.[1d]

Warriors of the enclave are usually clad in silver armour and blue garments - reflecting the sea of their captial. [1f]

Fleeing from the light of reason of their creator god, Teclis, the Cythai splintered into six factions and sought the deep places of the Mortal Realms. The Ionrach were the largest of these groups and whilst they guarded the first resting place of their people at the bottom of the Gealus Ocean in the Realm of Hysh, they moved on to establish a new capital in the Realm of Ghyran. [1a]

Before they divide, the Ionrach persuade the other factions that there should be periodic assemblies of representatives of all enclaves – these would later be known as assembrals. [1c] They called their first city Príom and as they prospered, they created new colonies in other realms.[1a] Depleting the coastal villages of Chósta-fe, the Ionrach attacked the duardin of Gronbeck provoking a huge battle that finally ended in the death or entering a soulless coma for of all those in the hold. [1b]

Volturnos gained fame in a successful campaign against a large orruk force and gains the title of king, he goes on to destroy the many islands created by the greenskins and eventually he is granted the honour of being called High king. [1b]

Territorial disputes between Ionrach colonies and those of the Dhom-hain enclave flare into war with battles fought in the realms of Ghur, Ghyran and Hysh. Later large numbers of the Ionrach break of from the enclave and form a new independent colony on the shell of a Great Scaphodon in Ghur. [1b]

The enclave calls an assembral to bring the Enclaves and the deepkin together and aid the Mor'phann who are under attack by the Skaven. The Fuethán however nearly provoke civil war and it is only by careful negotiation that the Ionrach avert it, instead steering injured parties to engage in honour duels or de'comhrac. [1b]

High King Volturnos leads a force to relieve the siege of Green Gulch and the Briomdar enclave and the Tidecasters wash away the tide of filth that had been invoked by the Daemons of Nurgle who were seeking Alarielle. Following this, Volturnos tries to find the goddess who has been angered by the deepkin raids on her people but she does not allow him to find her. [1b]

Created the Warden of the Soul Ledgers, Lotann aids not only his Ionrach kin but also other enclaves, whilst Volturnos, petitioned by Stormcast Eternals in Príom, attempts to build an alliance between the Deepkin and the other forces of Order but initial attempts fail. [1b]

The Masque of Slaanesh lures Volturnos to a meeting as he tries to end the warfare between the Daughters of Khaine and the Deepkin. He escapes with his life but loses an eye. [1b] Yet another assembral is called by Ionrach who are concerned with the growing threats to the various enclaves from Nagash, Slaanesh and the skaven. All enclaves are urged to unite against the enemies of their race. [1b]

The Necroquake results in massive assaults on the deepkin across the realms and the Ionrach send warriors to help not only the other enclaves but also the people an cities of Order under assault by the undead and followers of Nagash. [1b]

The Ionrath have control over a number of Whirlways that enable them to move and communicate across the Realms.[1e]