Incarnate elementals are creatures made of magic forces, each kind made manifest by one of the Mortal Realms.[1a][1b] 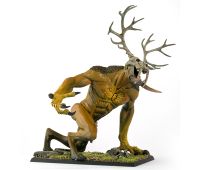 A miniature of an Incarnate Elemental of Beasts.

The Incarnate Elementals of Beasts are given will and bound together by the magic of Ghur. Each one is a gruesome fusions of meat and bone and savage beyond imagining. They use their savage talons, impaling horns and breath composed of amber magic to slash and gore through whole armies and reducing them to mutilated heaps of flesh. The potent aroma of freshly-spilled blood drives these creatures into frenzies, and even as is it dies it will lash out in an ever savager frenzy with vengeful hatred. Their howls are capable of freezing the blood of all who hear it. As the Incarnate of Amber magic, when they are in the Realm of Beasts they are able to draw upon its energies to heal or empower their attacks.[1a] 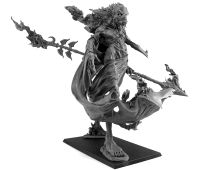 A miniature of an Incarnate Elemental of Fire.

The Incarnate Elementals of Fire are magical creatures given form from the wantonly destructive forces of Aqshy. Each one is a great burning figure of cindered flesh engulfed in robes of furnace-hot flames. It's flames are not natural flames, but rather and insidious and almost wilfully destructive arcane fore that eats into anything it touches and destroying it from within. Even their very presence brings destruction, the heat that radiates from it being strong enough to scorch metal and kindle flame into bright flames. They attack their foes up-close with burning lances and tendrils of fire, and from a distance with fiery bolts. As the Incarnate of Bright magic, when they are in the Realm of Fire they are able to draw upon its energies to heal or empower their attacks.[1b]