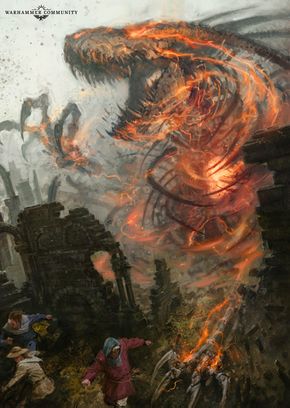 Incarnates are potent spirits formed of the magical energies of the realms.[1]

The first of the Incarnates emerged following Alarielle's Rite of Life, which dispelled the deathly influence of the Necroquake and unleashed a torrent of genesis-magic upon the realms. The explosion of jade magic caused the forests to grow taller, coral reefs to expand and animals to multiply in abundance, and her spells of vitality reached into the cores of all the realms. With the blooming of Geomantic power, magical energies began to coalesce and develop sentience.[1]

Since the rise of the first Incarnates, many primal societies have already taken to worshipping them, for no other beings are so intimately connected to the Mortal Realms.[1]

It has long been proposed by scholars of geo-arcane lore that the realms are alive, and the rise of the Incarnates have proven them correct. As the cosmos are battered by arcane tumults, the magic of each realmsphere seethes with protentional, and will on occasion splinter away to take on autonomous form. It takes a substantial concentration of thaumaturgical energies to birth an Incarnate. Therefore, they are typically found around ley-line convergences or spell-wracked battlefields. However, they may be summoned by champions with sufficient willpower or arcane prowess if the magic of a realm lies heavy in the air.[1]

While no two Incarnates are identical, those that spawn under similar circumstances tend to share similar traits. Therefore, kindred Incarnates are typically named after the location in which they were initially sighted. For example, Incarnates of Ghurish magic that coalesce near monstrous boneyards are typically referred to as Krondspine Incarnates, because they were first encountered in the Krondspine Range of Thondia, even if the Incarnate should manifest within the ravines of Lendu, the volcanic graveyards of Aqshy's Great Parch, or the oily tar-pits of Chamon.[1]

There are also Incarnates spawned amidst regions corrupted by Chaos that revel in acts of cruelty. The unclean magics that drip from these entities can pollute a land for centuries.[1]

After forming, Incarnates often seek to bind their nebulous essence into chunks of realmstone. In doing so they assume a more stable form, using the material as an anchor point from which to exert their powers. Many prospectors have fallen foul of this living realmstone when seeking the bounty of lesser shards, and are subsequently ripped to pieces or violently transumed by wild magical forces.[1]

Incarnates are fully autonomous spirits. Though they are similar in essence to Endless Spells, Incarnates are fully self-aware beings. Soon after their births, they looked to take vengeance upon those who threatened their mother-realms. Some Incarnates are akin to territorial beasts, but others are more intelligible to mortal. It is possible to communicate with them, but their temperaments vary wildly, from childlike naivete to jaded bitterness or outright hatred.[1]