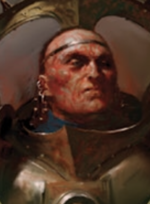 The leader of the Hammers Draconis is Lord-Celestant Imperius, a martial strategist of incomparable skill born to lead in battle.[3a]

Imperius is the Lord-Celestant of the Hammers Draconis Extremis Chamber within the Hammers of Sigmar Stormhost. [1]

Imperius was a mortal ruler during the Age of Chaos. Back in those times, he was Impero, the last emperor of Hydonia in Ghur. Hydonia was an empire that stretches from across an entire continent before it was brought down by the insidious forces of Chaos. It was not a Chaos warlord that brought down the mighty empire, but Impero's own brother. His brother lead an army of cultists that would bring a civil war across the empire. It was when his citadel surrounded, choose to fight the enemy. Riding on top of his armoured ghurstryder, he leads his household knights into battle against his hated foe. It was in this final charge that Sigmar saw him and choose him to be one of the Stormcast Eternals. [2]

The battle for the realmgate was one of attrition as Sigmar and Khorne sent in more forces to a city. Sigmar sent more Stormcast into the city with hopes to retake the city, but all were felled by Kul'rhex and his forces. In Sigmar’s hour of need, the Great Drake, Dracothion, brought ill-omens and hope to the God-King. With Dracothion’s help, Sigmar opened up the Extremis Chamber, but only one Extremis Chamber was ready to fight, the Hammer Draconis lead by Imperius. A single bolt of lightning lite up the skies over Vellixia as the Hammer Draconis arrived to retake the city from the Dark Gods. [2]

Hammer Draconis and Khorne Daemons clashed in the ruins of the city. Imperius personal lead his forces into battle as did Kul’rhex, but more of Kul’rhex forces were felled and banished by Hammer Draconis. The Dracothian Guard, Stormcast who rode on Dracoths into battle, were more than successful in defeating all but one daemon in Vellixia, Kul'rhex himself. Kul’rhex was one of Khorne’s top lieutenants for his rage sent many Stormcast back to the Azyr to be Reforged.[2]

The battle came down to is a duel between the two leaders of their respected forces, Imperius riding on his Star Drake, Loxia, and Kul’rhex. It was Kul'rhex who bit into the neck of Loxia and used his ax to push Imperius off of Loxia. Imperius stood up and called out to the Bloodthrister daring the demon to fight him. Each warrior clashed three times against each other, but it was with the thunderous strike against Kul'rhex that would end the battle. Kul’rhex’s body fell on the battlefield. Before the Bloodthirster could dissolve, Imperius took something from the daemon - the Crown of Flames. With what strength he had left in him, Imperius placed the crown onto a statue that closely resembled Sigmar. A symbol that he had returned to the Mortal Realms. [2]

Imperius would continue to fight in the Realmgate Wars after his victory over Kul'rhex. He would see action in reclaming the one of the all-gates, the Brimfire All-gate. In the fight to control the All-gate that he would be cutdown by Skarbrand.[1]

Lord-Celestant Imperius fights with Grolhed, a celestine hammer forged by the Six Smiths. In his hands, the weapon crackles with barely contained celestial power.