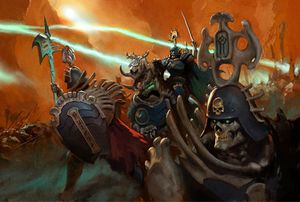 Immortis Guard are the elite constructs that exist to defend the Bonereaper command structure. Standing darkly magnificent in their dark raiment, their duty is to ensure no mortal vermin sullies their masters with the business of violence, nor interfere with the myriad sacred and complex tasks of the Mortisans whilst they are at work. With their tall helms and broad shields defending a bulky exoskeleton of layered bone, the Immortis Guard are grim sentinels that feel nothing in the way of pain or doubt. In battle, they interpose themselves between their masters and the most determined of enemy assaults, forming shieldwalls and bracing themselves to take the force of charges that would brush aside or break any conventional defence. [1]

Should the Immortis Guard launch a counter-attack, they do so with a combination of crushing blows from their massive battle-shields, and follow-up strikes from their polearms as their opponents struggle to regain their balance. When an entire unit of these constructs attack in concert they shield-bash, stab, then stride forward and bludgeon once more, delivering a synchronised coup de grâce with their halberds that has seen even rampaging mobs of Ironjaw orruks and charging Gutbuster ogors hurled backwards and unceremoniously dispatched in a matter of moments. [1]