From Age of Sigmar - Lexicanum
(Redirected from Idolators)
Jump to: navigation, search 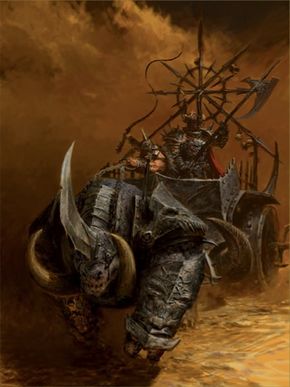 Idolators Lords are known to ride upon Chaos Chariots

Idolator Hordes are Hordes of Slaves to Darkness composed of frenzied worshippers of the Ruinous Powers that seek to spread their deranged worship far and wide. Wherever the profane symbols of Chaos power stand, there can be found Idolators. In acts of worship, they tear down the false idols of rival gods, dragging away defeated foes to be brutally sacrificed in dark rituals. The Chaos Gods llook favourably upon the Idolators, and the warrior priests that lead them. Each warrior priest is able to call upon the blessings of an individual Chaos God or even all of them at once. Idolator armies include vast throngs of twisted Chaos-worshippers from various esoteric cults, often differing in appearance and culture, but equally obsessed with proving themselves in the eyes of the gods. The Idolator Lords themselves are known to ride upon Chaos Chariots, from which they can incite their followers to action with incendiary rhetoric.[1a]