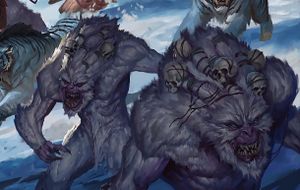 This is an article for the Icefall Yhetee unit, you may be looking for the article about the Yhetee race

Icefall Yhetees are cold-blooded, simian horrors and white-furred killers that come from ice-covered mountains and wide tundras, that follow in the wake of the Beastclaw Raiders.[1][2a]

The origins of the Yhetee remain shrouded in mystery - they are speculated to be anything from descendants of Ogors abandoned and remade by the magic of the Everwinter to being born from the gales of the harsh winds themselves, pouring forth from the frozen depths. The Weirdnob Shamans of the Icecrackas Warclans believe them to be the divine children of Gorkamorka himself. Whatever it may be, the Yhetee do not speak of it - indeed, their language is eldritch and strange, spoken only by the Huskards. [2a]

The deathly cold they spread is strong enough to form a thick layer of ice over their fur that acts as armor. Weapons used against them freeze up and become heavier covered in ever-growing layers of frost. They attack their enemies covered in snow, knowing that it's at this moment of helplessness that their enemies are most vulnerable.[1][2a]

In spite of their vicious howling, the Yhetees are deadly and often subtle foes. When following in the wake of Alfrostuns they howl and lope through the snow at the speed of a howling blizzard, but can easily hide their white-furred bodies in the blizzards and snow created by the Everwinters.[2a]

hey wield crude clubs, axes and poleaxes made of stone covered in a thick, magical hoarfrost, that appear on their hands seemingly out of nowhere. [1] No matter the temperature, these weapons will not melt - even in the Realm of Fire's parched lands opponents will find their breath steaming and blows sluggish before the Yhetees - a fact their savage foe will take full advantage of. [2a]