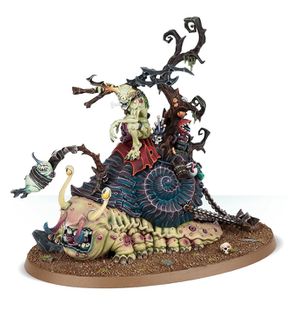 Horticulous Slimux, the Grand Cultivator of Nurgle, is a Daemon of Nurgle and possibly the first Daemon Nurgle created. He is loved by his master, but lacks the humour of the other more jovial daemons of Nurgle, known by them as "old sour-seed". Any nurglings caught sharing this opinion will be used as bait for his monstrous mount, Mulch. Wherever he goes the soil behind him turns into loam, allowing for flora around him to swell, spreading disease and decay like a scent on a breeze.[1]

He heads into battle onto of Mulch's shell and seeds the fabric of reality with the Garden of Nurgle using the Gruntleplough. He is usually surrounded by Beasts of Nurgle as he is their handler. He slays his foes by snapping them in half with his Lopping Shears.[2]

He fought Neave Blacktalon in the Blight War.[1]

Following the Necroquake he returned to the Realm of Ghyran, breaking into a Stormvault and releasing the Black Oak, a vast Feculent Gnarlmaw as well as planting new seeds of that cursed growth. [3]