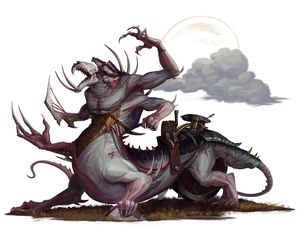 Hell Pit Abominations are one of the most valuable monstrous creations of the Clans Moulder.[1a]

These gargantuan misshapen monstrosities are produced by transplanting many beasts into a single unholy whole, a process that involves a copious amount of warpstone.[1b]

Hell Pit Abominations use their myriad of limbs and their wheeled carriage to lurch in an undulating motion towards the victims that they find by scent, sound and vibration. Those mass of scabrous muscle and blubber rears high and slams down to crush any that oppose them. The survivors are quickly finished by the snapping maws, lashing talons and pulverising bludgeons.[1b]

A Hell Pit Abomination can regrow lost limbs and there is a chance that upon being slain its unholy metabolism will restart one of its many hearts. If not its freshly dead carcass disgorges the tides of rats who were gnawing upon its innards.[1c]

The countless amount of warpstone present into a Hell Pit Abomination makes it highly resistant to magic.[1c]