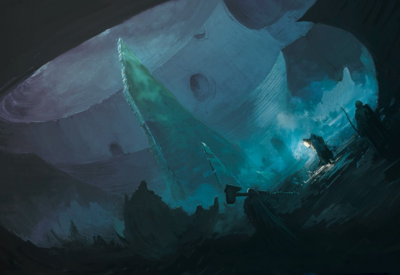 Inside the caverns of Harrowdeep

Harrowdeep is a cavernous labyrinth situated deep beneath the seabed of the Shadowsea in the Umbral Veil of the Shadrac Convergence in the Realm of Ulgu.[1a]

Located even below the lightless ocean floor, the ancient structure known as Harrowdeep is equally parts winding labyrinth, and ominous pit. I coiling spiral, its caverns and hallways leading deeper and deeper into the depths of Ulgu. Floodings and the always present shadow-magic of Ulgu makes it impossible to determine its true size.[1a]

Harrowdeep is shrouded in mysteries and legends, and little can be known for sure. But some details stay surprisingly consistent among the countless tellings that circulate the Realm of Shadow. Its when the Orb Duplicita, darkly fabled moon of Ulgu, is at its apogee that the doors to Harrowdeep open. Any surface touched by its sickly gaze can transform into a gateway into the depths. Even swamp water can turn into a whispering whirlpool that transports anyone unlucky enough to be pulled beneath the surface into the lightless halls of Harrowdeep.[1a]

Those that find themselves trapped inside Harrowdeep soon feel the dark influence of this dark labyrinth. Paranoia soon grips the minds of even the most stalwart allies, while all that reside inside these walls feel a growing urge to descend deeper and deeper down the spiral. Legends speak of vaults filled with treasures and powerful artefacts deep inside the dark heart of Harrowdeep.[1a]

The upper most levels of Harrowdeep do not appear too different from other dungeons that can be found all across the mortal realms, ancient structures made from slick stonework, as well as signs of recent Aelven habitation.[1a] Only, the further one descends the more strange and other does the enviornment become; weird geometrics of the stonework and echoes that do not quite feel right, all acompanyed by the spray of the Penumbral Falls, a torrent of shadow-magic gushing from the top of Harrowdeep.[1a]

Deeper in, the hallways spiraling further and further into the depths become claustrophobic, harder and harder to navigate. Portals that appear when moving towards them from one angle, but not from another, Smooth, featureless obstacles barring the way forward, all while half sunken skulls are fused to the walls, their empty eyes staring into the darkness.[1a]

Some of the larger caverns and structures inside the labyrinth have been given names by those trapped inside its depths. The Halls of Hidden Eyes, and the Vaults Mysterium are just a few of them.[1a] 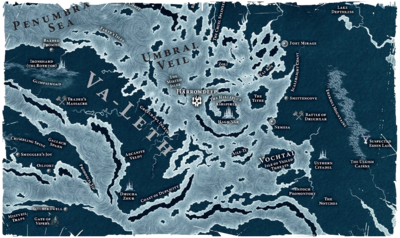 Harrowdeep inside the Shadrac Convergence

In the Age of Myth, legends of the ancient coastal tribes in Ulgu tell from a "Deeper Darkness", a place far beneath the dark seas of the Realm of Shadows that cant be found by looking for it. Myths warn about ships being lost under the dark gaze of the Orb Duplicita, but with the dawn of the Age of Chaos and its own horrors, the tales of Harrowdeep became lost to time.[1b]

It was only rediscovered in the Age of Sigmar. The Idoneth Deepkin and dissident Daughters of Khaine of Urama Othal managed to gain access to the halls of Harrowdeeps. Trough the Silent Stair they descended down into the dark chambers. Yet, when Morathi's agents finally found the hidden Enclave of Urama Othal, it was deserted. Only strange and twisting shadow magic remained in the city, and the shrouded halls below.[1b]

Ever since, the whispering whirlpools, portals to Harrowdeep, have opened up with increasing regularity across Ulgu and the Mortal Realms. Trapping more souls than ever before in the lightless chambers of Harrowdeep.[1b]