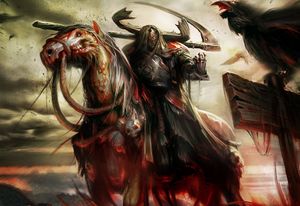 An Harbinger of Decay.

Harbingers of Decay are mighty commanders of Rotbringer armies. They ride atop on mouldering saddles equipped on the backs of monstrous Daemonic Steeds with their bloated form, like sacks of flyblown offal. They are confident in their god's approval of them and many consider them the gaze of Nurgle himself, those under him fighting with morbid vigour when under their sight. Nurgle rains down plenty of vile blessings on them as a reward for committing their disgusting deeds with a sinister pride.[1a][1b][2]

Harbinger ride atop of emaciated and vile Nurglite Daemonic Mounts that look more dead than alive. They spread diseases with their flyblown bite.[1a][1b]

Harbingers wield Plague Scythes, Rotswords and Soulbound Shields into battle. The Rotswords are like the touch of Nurgle, and drawing it from its decaying scabbard is enough to start an epidemic and infect their victims with virulent diseases.[1a][1b]