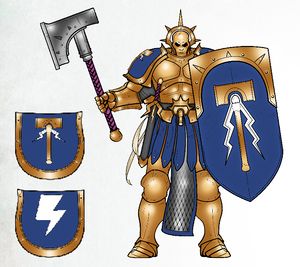 A Liberator of the Hammers of Sigmar.

"First to be Forged, Never to Fail" - warcry of the Hammers of Sigmar.[24]

The Hammers of Sigmar are a Stormhost of the Stormcast Eternals, wearing gold and blue armor. They were the first stormhost to be assembled and hurled upon Sigmar's divine lighting to fight the forces of Chaos, and the largest of the Stormhosts able to call upon almost all types of warriors Sigmar has devised.[1][6][21]

For being the first of the Stormcast to fight against Chaos they bear a great and honour which they bear with strength and nobility, and every single warrior and commander fights with such a vengeful determination that fills the servants of the Dark Gods with dread.[21] 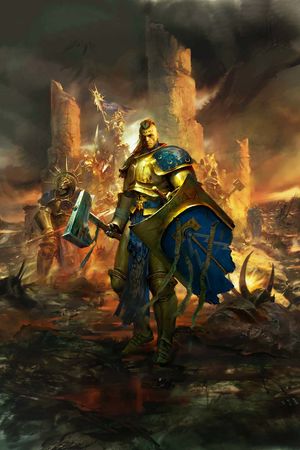 Hammers of Sigmar on the battlefield.

Battle for the Brimstone Peninsula

The first battle of the Hammers of Sigmar was on the Brimstone Peninsula, led by Vandus Hammerhand with the support of other Stormhosts.[9][23a]

Lord-Celestant Jactos Goldenmane assaulted the Goretide, but he was beheaded by Korghos Khul and his soul was unable to return to Azyr. Khul tried to use Jactos Goldenmane's head as the final sacrifice to complete his Red Pyramid of skulls and become a Daemon Prince. When the ritual was almost complete, Vandus reached him and challenged him to single combat. When he was almost defeated, Vandus called upon Sigmar's Great Bolts to destroy the Gate of Wrath and the Red Pyramid. The God-King heard his prayers and Khul's resources were destroyed. The Brimstone Peninsula was conquered.[10a] Near the site of Hammerhand's victory over Khul's forces, Fort Ignis was built.[24]

Korghos Khul is banished, the Jagtooth Forts are demolished and Sigmar's armies expand to from the defensible peninsula to conquer the Great Parch back from Chaos.[23a]

The Hammers of Sigmar are one of the Stormhosts sent to recover Ghal Maraz in the Hanging Valleys of Anvrok. The Heldenhammer Crusade besieged the Eldritch Fortress built by Tzeentch's followers in the once great metropolis Elixia. Vandus Hammerhand and Thostos Bladestorm had to face Ephryx, Korghos Khul and Skaven hordes combined while Dracothion and Argentine battled in the sky. Thostos used his assault to give enough time to Vandus, who was finally able to recover Ghal Maraz.[14]

In Chamon, Archaon wanted to get his hands on Kiathanus, the Tzeentchian daemonic oracle. The Hammerhands opposed him and fought him on Mount Kronus, but they're completely annihilated. After this defeat, Dracothion roared and unleashed a surge of energy which empowered and opened the Extremis Chambers.[13][15] Vandus was among those killed on Mount Kronus, personally cut in half by Archaon using the Slayer of Kings. Before his soul returned to Azyr, Archaon run his fingers through it. After long years, Vandus was reforged, but he started to witness strange visions and warnings from a figure of pure energy he called the Lightning Man.[23][24]

The Hammers of Sigmar fought in the Nexus Wars to reclaim the All-Gates. In Aqshy, the Fyreslayers triggered the Rune of Binding on Ignax, turning the Solar Drake from Archaon's ally to enemy. Imperius succeeded in creating a path through the Hell Breach, but then he was killed by Skarbrand. Vandus Hammerhand slew Skarbrand and the Brimfire Gate was closed.[16][23]

After the Realmgate Wars

Hallowed Knights, Anvils of the Heldenhammer, Hammers of Sigmar and many other Stormhosts fought for long years the orruks around the Stormrift Realmgate. The Hammers of Sigmar were the first to capture the Realmgate, so the honour to build the first Stormkeep went to them. This started what would become the famous city named Hammerhal, while the Stormkeep on Hammerhal Aqsha became known as Perspicarium.[24]

Lord-Celestant Rygius Brightsoul, supported by twenty-six regiments of Hammerhalian infantry and battallions of Dispossessed and Ironweld Arsenal, led his warrior-chamber to the Reaver Wastes, north to Hammerhal. There he fought a splinter of the Goretide led by Exalted Deathbringer Scyrus Skinshear. After seven days of battle, Fyreslayers from the Vostarg lodge bolstered Brightsoul's ranks and a Knight-Venator pierced Skinshear's throat with an enchanted arrow. The Battle of the Reaver Wastes ended with the Order victorious.[22]

After recognising the threat of Horticulous Slimux, The Great Cultivator, Sigmar sent out Aetherwings to bring a secret summons to Knight-Zephyros Neave Blacktalon, who returned to Azyr and kneeled before the God-King's throne. Lord-Aquilor Danastus, leading the Shadowhammers, and Neave Blacktalon departed to track down and kill Horticulous. They found him and his army in the High Snows of Thorca in Ghyran, before they could reach and defile the abandoned fane of Grungni. A great portion of Slimux's army was destroyed, but the Great Cultivator escaped.[26]

Neave and the Shadowhammers continued to follow Slimux's trail. They faced him at Bulakh, amidst the forests of Low Yorathi and upon the Veilpaths of Forl'ek, but he always escaped. At last, they found him again in the Bone Heights of Ghur, near Excelsis. The final battle happened before the Emberwash Realmgate and Neave dueled with Horticulous, but the outcome remained unknown.[26]

Vandus Hammerhand was the first to witness visions of malign manifestations across the Mortal Realms. The Lightning Man warned him of Shyish Nadir and Nagash's plan to harness the magical energies of the Realm of Death.[24] Vandus talked about his visions to the God-King, who decided to hurl meteors of prophetic celestium to the Mortal Realms, giving the opportunity to rulers and common people to witness visions of salvation.[27]

A force of Hammers of Sigmar which included Vorrus Startrike, one of the Lord-Ordinators sent by Sigmar to find and use the celestium meteors to divine possibile futures, freed a Warscryer Citadel from Skaven intruders. The Lord-Ordinator used the arcanoscope in the building to see a huge skeletal legion marching in a single-file line on Shyish. Using his mind and the celestial energies of the Citadel, Vorrus projected a cloud of Azyrite lightning through time and space, reaching the skeletons he saw in his vision and blasting as many as he could, before realizing it was all useless because there were thousands of other processions from the Realm's Edge to the Great Black Pyramid.[28a]

Aventis Firestrike and the other Lords of the Heavenhall fiercely debated when Morathi arrived at Hammerhal. She convinced them to send the cities armies to join her own in attacking the Realm of Shyish.[28b] During another reunion of the Stormrift Conclave, Aventis joined the vote to make the alliance between the armies of Sigmar and the Temple of Khaine permanent and official.[28d]

At the beginning of the Soul Wars, Knossus Heavensen, Lord-Arcanum of the Hammers of Sigmar joined his fellow Hammers, the Anvils of the Heldenhammer and the other defenders of Glymmsforge against the forces of Nagash.[25]

There's always at least a Chamber of Hammers of Sigmar fighting somewhere. That's why they're quickly reforged to join battle again, maybe the same in which they fell before. Some of them have begun to see the side effects of this constant cycle of life and death. Some Hammers of Sigmar are affected by visions, like Vandus Hammerhand; others have blazes of lightning around their head or manifest celestial energy in their fists when they're enraged.[24] 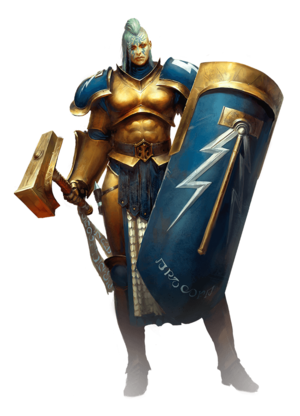 A Liberator of the Hammers of Sigmar

The Hammers of Sigmar are famous for having the largest Extremis Chamber of all Stormhosts.[24]