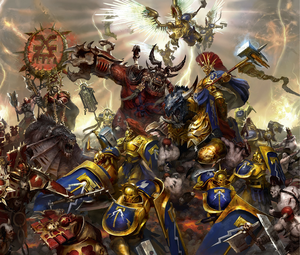 The Hammerhands vs the Goretide.

The Hammerhands are a Warrior-Chamber of the Hammers of Sigmar Stormhost.

First to the fray!

Vandus Hammerhand leads the assault against the Goretide of Korghos Khul, securing and opening the Igneous Gate and defeating Khul at the Red Pyramid. A Stormkeep, Fort Ignis is later raised at this location and the Hammerhands are often considered figureheads of the new age of hope with a stretch of caostline - the Hammerhand Coast being named for themin the same area. [2]

Along with eleven other Stormhosts, the Hammerhands battle through the Hanging Valleys of Anvrok, seeking the legendary Ghal Maraz for their lord Sigmar. Although many are slain in the brutal campaign, Vandus is able to fight his way to and personally claim the ancient hammer. [2]

The War of Lost Time

Seeking to stop the Watcher King from freeing the imprisoned Lord of Change Kianthanus, Vandus leads his Chamber to the Anachron Plateau in the Realm of Chamon. There they have to endure the strange gravity of Mount Kronus and the time warping effects of the Well of Time. As they are about to reach the Watcher King, Archaon himself arrives who cuts Vandus in half and overseers the slaughter of his warriors. [2]

With Vandus still missing, they are led by Ionus Cryptborn and in Asphyixia, the Hammerhands along with eight other Stormhosts attack their old enemies, the Goretide and their Nurgle worshipiing allies. The battle rages around a henge of red crystal and it is only when Ionus lures Skarbrand into the circle, turning his rage into a wave of destruction that the forces of Nurgle are banished. Yet at that moment of triumph, the Hammerhands are again wiped out, with Ionus falling to Valkia the Bloody herself.[2]

The Hammerhands join the assault on a ring of massive fortresses guarding the Brimfire Gate in the Realm of Aqshy, aided by Fyreslayers. In the middle of the battle, a reforged Vandus re-joins them and takes command leading his warriors into a breach blasted out by Ignax. Many are within the fortess slain until Vandus confronts Skarbrand and slays him, enabling the Stormcast to close the Realmgate. [2]

Following the Necroquake, the Hammerhands go to war in the Realm of Shyish. [2]