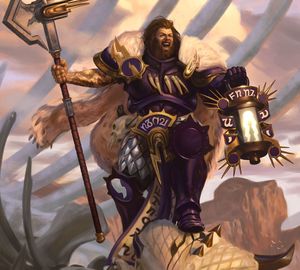 Hamilcar Bear-Eater was Lord-Castellant of the Bear-Eaters, a Warrior Chamber of the Astral Templars Stormhost [1] and is now a Knight-Questor.[4]

He is a huge man with thick red hair and beard, his face tattooed and his teeth painted black. Sacred beasts are depicted on his armour in stick figures whilst a cloak of Carthic bear skin is draped over one shoulder. He is also known for his uncanny resemblance to Sigmar. He was accompanied by the gryph-hound Crow. [1][2][4]

During the early part of the Age of Sigmar he was dispatched alone to aid the city of Nemisuvik in the Realm of Ghur which was being besiged by the Champion of Khorne, Blackjaw. Despite his frustration that the enemy would not engage, but simply bombarded the settlement from a distance, he did enjoy the company of their warriors - the Maorai and later discovered the Angujakkak (also known as the Grey King) and by accident helped unleash it on the Chaos fleet. He manged to reach the flagship of Blackjaw and defeated him.[3]

He and a dozen Stormcast pursued Mannfred von Carstein across the Sea of Bones following the fall of the cities of the Carthic Oldwoods to the forces of the vampire and the Ironjawz Megaboss The Great Red. In the final battle for the area, Mannfred had defeated and slain Hamilcar but reforged, he led a force to defeat Mannfred and the Megaboss, aided by the Mortarch, Arkhan and his own Undead army. [1]

Crossing the sea he arrived at the kingdom of Jercho, welcomed initially by General Sarmiel el Talamé but when he reached the capital he and his Stormcast were attacked by the warriors of Joraad el Ranoon the Sun-king ruler of Jercho. It was revealed that Mannfred had turned him against the wariors of Sigmar and several of the nobility were now vampires, but these were, along with the king were slain and the kingdom claimed for Sigmar. [1]

After retaking the Seven Words a city situated on the slopes of Gorkoman mountain, Hamilcar was forewarned by Lord-Veritant Vikaeus of an imminent Skaven attack. To preempt the danger he issued a challenge in front of the city for single combat between him and the Skaven horde. The Skaven warlord Ikrit accepted, but revealed only a clanrat inside a golem of scrap metal to duel. While he dueled the golem outside the city, inside Vikaeus foils Ikrit's plan. Hamilcar slays the golem and returns triumphant to Vikaeus who berates him for his recklessness.[2]

Hamilcar led his Stormcast and Freeguild forces into the Nevermarsh, a expanse of frozen marshland in the Low Gorwood, an army of some 1900 humans, 3 ogors and 50 Stormcast, with about 2000 camp followers trudging in their wake. He sought to engage the forces of Brayseer Kurzog and Manguise the Bloatlord [4a]